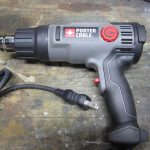 Heat guns are versatile tools used for everything from heat-shrink tubing for wiring to paint stripping. In fact the heat gun has been the go-to paint stripper for many until recently. Two big issues exist when it comes to paint stripping: 1) heat guns potentially vaporize the lead in lead paint (and you shouldn’t be dry-stripping lead paint anyway), and, 2) you might burn your house down. I’ve heard anecdotal stories about heat guns igniting an ember in a wall where paint stripping was underway and, so legend has it, the house eventually burned down. Curious about heat guns’ incendiary qualities, I decided to channel my inner Beavis and see if I could get some stuff to catch on fire using only the PC1500HG heat gun sent to us by Porter Cable. I of course observed all the safety precautions of an untrained but cautious professional, but please, don’t try this at home (or at your friend Butthead’s house).

My first task was to target a HomeFixated business card with the PC1500HG. I assumed after a minute or two of point-blank heating the card would spontaneously burst into flames. Much to my dismay, five minutes of patient aim at the highest heat and fan settings and the card was seriously scorched, but still intact. Halfway through the experiment, the card appeared to read “Ho-Fixated.” Not wanting people to get the wrong idea, I kept up the heat until the card was charred to be more socially acceptable.

Disgruntled that no flames resulted in test one, I moved on to the Kleenex test. I’ve never really tried to light tissue on fire before, but intuition told me it should be prone to easy ignition. As you can see from the photo, the PC1500HG again produced scorching results, but no flames. By the way, the bolt in the photo is there to keep the tissue from flying away. At this point I was getting desperate for fire, so it was time to delve into my television survivor guy knowledge. I remembered an episode of Survivorman where Les Stroud uses some pocket lint to start a fire. By the way, if you’d like to start a Survivorman (Les Stroud) vs Man vs. Wild (Bear Grylls) debate, please chime in via the comments below. Anyway, I’ve actually used lint to start a fire, and since there happens to be a clothes dryer dubiously placed in my man-cave, I had a ready supply. Long story short, I couldn’t get the lint to catch fire either.

I guess the moral of this story is don’t count on the Porter Cable PC1500HG to start a fire for you in a survival situation. So, does all this lack of flames mean this or other heat guns can’t potentially catch stuff on fire? Let me and my uncomfortable team of lawyers say, “definitely not.” You should still treat this and any heat gun with the utmost of caution. Legal disclaimers aside, I was reassured that the PC1500HG wasn’t going to start combusting things instantly wherever I aimed it. In most heat gun applications, you’re looking to warm not burn anyway.

I tried to measure the heat coming out with our DEWALT Infrared Thermometer, but it’s pretty close to impossible to get a read on hot air. We did find that the metal tip got well over 400 degrees with the gun on its highest setting. According to Porter Cable’s spec’s:

The Porter Cable PC1500HG offers a lot of flexibility by including two fan speeds and the temperature control dial. Depending on the type of work you’re doing, you can keep air flow mellow or vigorous, and adjust the temp from hair dryer warm (please don’t use this as a hair dryer) to marshmallow-torching hot (hmmm, now there’s an idea). Light weight makes holding the Porter Cable heat gun for extended periods easy on the arms. The rear end of the gun is deliberately designed flat so that the gun can stand unsupported. Since people inevitably set a blisteringly hot heat gun down where they shouldn’t, the flat-back stand also serves as a great safety feature for letting the tool cool down before storage.

So if you prefer to heat your targets and not completely burn them, then the PC1500HG might be just what you need. You can find the Porter-Cable PC1500HGA Heat Gun with Accessories