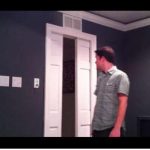 As much as I like Star Wars, I have always been a Star Trek kind of girl. Sure, it’s easy to say that now, after JJ Abrams rebooted the series in such a hip way, but being a Trekker wasn’t always a respectable thing. Trust me – when all your tween friends were fawning over Bop Magazine and New Kids On The Block, admitting your cringe-worthy crush on Lt. Commander Data was not exactly the fastest way to achieve popularity and a successful social life. But even I, a solid devotee to the Star Trek franchise, would never think to do what this man did – and install a classic Star Trek feature to his home.

Meet Marc, (not the HomeFixated editor Marc by the way). This homeowner and electrical engineer’s love for Star Trek and a willingness to experiment with design has earned him my undying respect and a bit of fame from the Internet. You see, he doesn’t simply have a life-size cut-out of Brent Spiner poster of the Enterprise in his room – he made a fully operational Star Trek-style door. Even if you could care less of who was a better captain – Kirk or Picard (Picard, always Picard) – you know what door I’m talking about. It’s the one that would lead from the turbolift to the bridge that would open and close automatically with that little “pssssssh” sound. It’s classic Trek. Check it out:

And what’s even better? He’s provided some instructions on how to make it yourself! Reading his blog or getting a Pro account on Instructables will get you more details on how you can recreate this for your own home, but off the bat, here are some of the things you’ll need to make something similar are:

Of course, you’ll also have to tear up your walls – and fix them when you’re done – so you’ll need these skills and tools as well. For room functionality reasons, Marc made his door so that it operates with a button-touch rather than a movement sensor a la the series, but we’re sure that with his work as inspiration, you could go for a more ‘purist’ route on your own door.