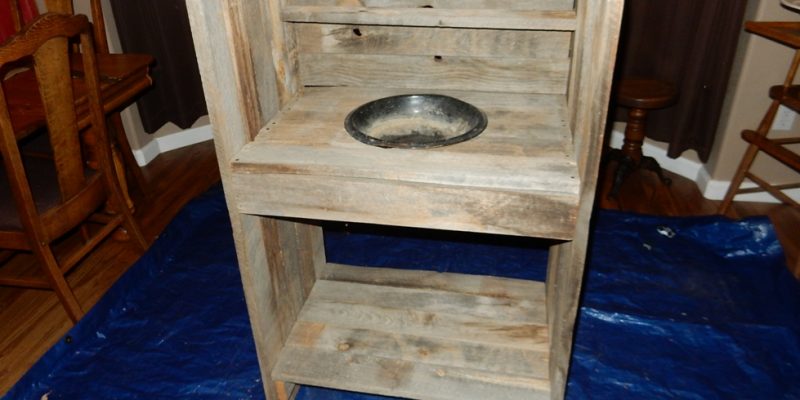 Gardeners these days have to be careful about what we say. We can innocently be chatting with a stranger about how totally addicted we are to growing and getting the pot all ready to go, and suddenly the stranger will appear uncomfortable and quickly move away. So as not to offend or be misunderstood, this potting bench we’re going to share with you is just for gardening and pots. Not for growing. Or for weed.

This potting bench is to store pots on (not pot), and we’ll begin to grow seeds (not weed) on it. But that’s as far as it goes. Nothing controversial. Just a good old potting bench for tools, dirt, and a surface area. After some heavy use in the spring, I hope to use the bench to display some paraphernalia, like flowers and other pretty plants for the rest of the season.

Kicking the Craving with Reclaimed Lumber

The potting bench idea blossomed out of desperation. It’s freezing here where we live, and real gardening is still months away. Due to my addiction, I just had to do something. I was snooping around the back corners of our garage, searching for anything to get me through. I found a bunch of old fence rails. I’d just been dealt something incredible! Like a double hit, the old wood satisfied not only my need to garden, but also my fixation on repurposing junk.

How to Build the Potting Bench

I lined up the old rails on the ground. I wanted to base the entire bench around a bowl. It’s a really cool vintage, granite bowl that will give the potting bench a lot of character. The challenge would be to cut the old, dry, rails without splitting them. My Ryobi jigsaw did the trick. I traced around the bowl and gently cut the pieces to the pattern of the bowl. Next, I attached a couple of support boards cut from the rails to the underside of the surface to strengthen and support the old wood.

With that job done, I could base the rest of the dimensions of the wood around the five pieces I used for the diameter of the bowl. At this point I acquired a couple of helpers.

We had to work inside and out since even the garage was so cold! We made cuts with the Dewalt miter saw in the garage, and we assembled everything inside on a tarp in the living room gone workshop.

We built a box to accommodate the surface where our bowl will sit. To make sure the box is solid, we carefully drilled into the old wood. We used screws to make it strong. Then, we trimmed 10 rails to the equal dimension. We left the original angled tops of the old fence on most of them, and we mitered a couple of the angles ourselves just for looks.

We attached 5 rails to the two sides of the box. When we stood the box up, we were almost finished. We cut a few more rails to create the back of the bench. Then, we created a small shelf to use for “seeds” and smaller tools.

Underneath, we screwed a couple of rails horizontally across the vertical rails for stability. This allowed for a lower shelf, too. We used a few more rails to fit across for the shelf.

I’m pretty stoked with the way the bench turned out. It has a wild and undomesticated appeal, and it’s going to be so useful when the warmer weather finally comes around. Especially the bowl. It’s going a be smoking good time to mix some well rotted manure with the potting soil for the perfect blend. And when the mixing is over and the growing begins, we’re just going to kick back, relax, and enjoy our potting bench. 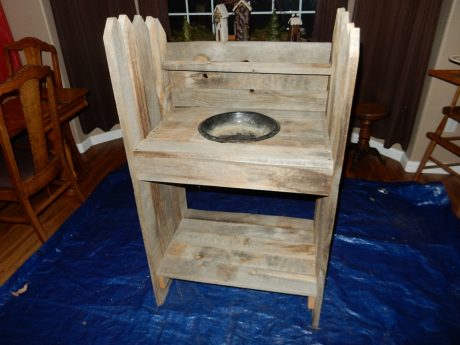