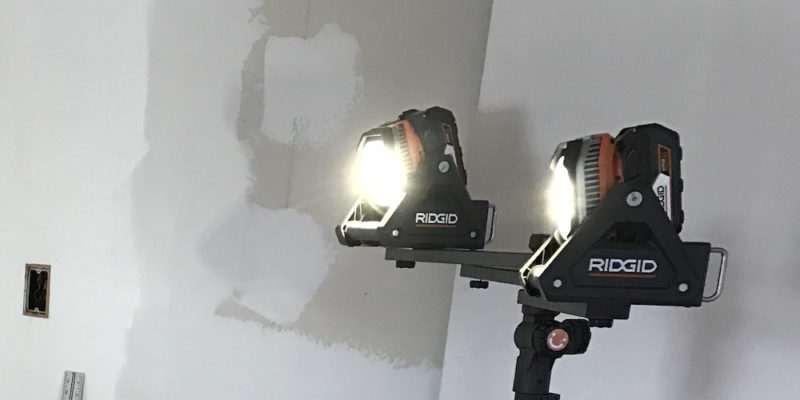 Tired of third-degree burns and tripping over extension cords in your quest for a good work light? In their attempt to remove every power cord from the job site, the major toolmakers have all been introducing various cordless LED work lights. In previous attempts to light up your life – or at least the dark workday portions of it – we took a look at Ridgid’s folding work light and the more portable Ridgid Light Cannon. But wait – there’s more! If you’re looking for a more traditional-looking work light, join us as we take an illuminating look at the Ridgid 18V Flood Light they sent our way.

Capable of operating on any Ridgid 18V battery, the fairly compact Ridgid 18V Flood Light has several features in common with the other lights in the lineup. The brightness can be dialed in to the precise amount of light needed, and the light has several mounting and positioning options. Here’s a list of the specs, followed by a quick overview of the work light lineup from Ridgid.

Detachable 180-degree swiveling light cradle holds the light in place, while directing the light where it’s needed
Extended runtime: Up to 20 hours of continuous runtime with 5.0 Ah battery
Up to 1,200 Lumens with variable power dial: Powerful output with adjustable lumen level to match brightness to the job
Compact profile, designed for easy transportation and storage
Temperature control electronics, to protect LEDs from overheating

Let Me Tell You Where You Can Put That Light

Every job site is different, and each trade has different lighting needs. Drywallers and finish carpenters want the whole room lit up, while the plumber is more concerned with lighting up that cozy space under the sink. Ridgid’s product design peeps did their best to make sure everyone would have a handy way to use the Ridgid 18V flood light.

First and most obvious: Just set it on the floor or table, and adjust the light to the position you want. The light can rotate 360 degrees through the cradle, which should be enough for just about anybody. It’s not particularly useful to light up your work area when pointed straight down, but it does protect the lens when you’re not using it. The light stays pointed where you want it, and if it should loosen up, screws on the side can re-establish your favorite tension level.

Next up, two metal hooks pop out of the rear of the base. Hang the Ridgid 18V flood light from a cable or wire, stick it on top of a door, or hang it off a piece of drywall or a couple of temporary screws or nails…use your imagination, people!

What’s that – you want more? Fine. Ridgid used the underside of the base to add a couple more ways to mount your light. A pair of keyhole slots 2” apart lets you securely hang the Ridgid 18V flood light on the wall using a couple of screws or nails.

For more mobility and positioning options, Ridgid also built in a standard ¼ – 20 threaded tripod mount, which will fit any standard tripod. If you regularly use job site lighting, and want a rugged tripod designed to take a beating, check out the Ridgid Universal Collapsible Tripod Stand. It’s lightweight, extends up to 7’, and can hold up to three work lights – or a laser level, or anything else that mounts on a tripod.

For you extremely needy and demanding people who are muttering “Still not enough!,” sheesh! Here’s another option for those who need to get into tight spaces, or want a smaller unit to schlep along for a quick look-see in a dark, scary space. On one end of the light is an orange switch, mysteriously labeled “Release.” Pushing this switch will, astoundingly, “release” the light and battery from the cradle. Play under the sink, check on top of that ductwork, go walkabout…the possibilities are endless.

Now that we’ve finally figured out how to position the Ridgid 18V Flood Light, let’s fire it up! The light is sold as a bare tool, so you’ll need a Ridgid 18V battery. Any size will work, but obviously a higher amp-hour battery will run longer. Just slide the battery on, and you’re ready to shed some light on the site.

The power button is on the top of the light head. If you need instructions for the power button, you probably shouldn’t be working with power tools. On. Off. And here is pretty much my only minor quibble with the Ridgid 18V Flood Light: The touchiness of the power button. Its position on the end of the light makes it susceptible to being turned on accidentally, and I’ve done it. A lot. It’s not a huge deal, more a minor annoyance, but I wish they had just recessed the power button a bit. It only takes a second to turn it back off, but if the light happens to be angled toward your face, you’ll be seeing spots for a minute.

When the light comes on, it’s always at the highest setting – a nice, bright 1,200 lumens. Want to dial it down? A black dial surrounds that evil orange power button. Turn the dial counterclockwise to dim the light, clockwise to brighten things back up again. Easy peasy. It’s a nice alternative to the High/Low/Off most lights have, and lets you dial in the exact amount of light you want.

I used the light on several recent projects. I’m building oak window frames for several windows, and working in an unlit room. A pair of Ridgid 18V flood lights, mounted on a Ridgid tripod, enabled me to get the pocket screws on the right side of the wood. I also used the lights when installing some of the finished frames.

I also used the Ridgid 18V flood light while working in the basement of a duplex we are renovating. I was working in a poorly lit basement, reinforcing the landing on the basement stairs from underneath. The light let me see just how scary the existing stairs really were, and to get them fortified.

While I was at it, I replaced an approximately 100-year-old light switch at the top of the stairs, which required shutting off the power, which meant – eeek! – total darkness. Being able to set the light down on my newly-fortified landing let me light up my work area perfectly. I actually turned the flood light’s power about 2/3 of the way down, because the light was too bright. A good problem to have!

Is This The Right Light For Your Site?

The Ridgid 18V Flood Light is a great little light. It’s ruggedly built, inexpensive, and puts out a good bit of light. It’s a great alternative to the more common halogen lights, which get very hot and – oh yeah – need to be plugged in. The light gets good mileage out of an 18V battery; I got just over 6 hours from a 5.0 Ah battery on full power, and Ridgid claims the light will run for up to 20 hours on the lowest power.

The light is very versatile, and would be useful for someone working in pretty much any of the trades. It would be a handy tool to have around the house, too, for homeowners or DIYers. Put it to work installing that new kitchen faucet, working in the attic or under the car, or lighting up the volleyball court at night. It’s covered by Ridgid’s 90-day return policy, a 3-year warranty, and the Ridgid Lifetime Service Agreement upon registration. Dial one in at the Home Depot for around $60: 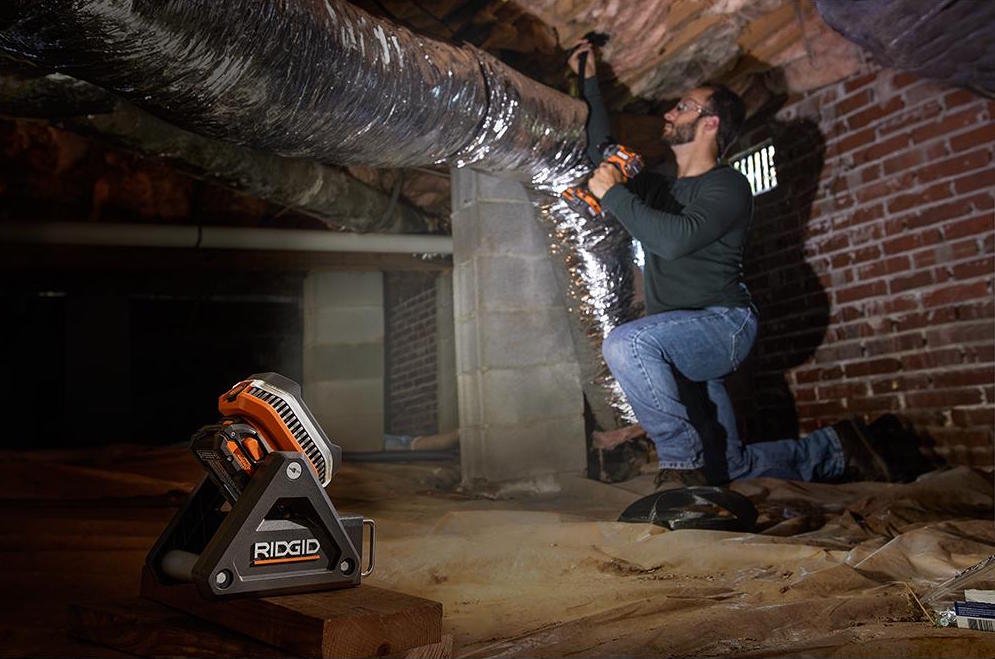