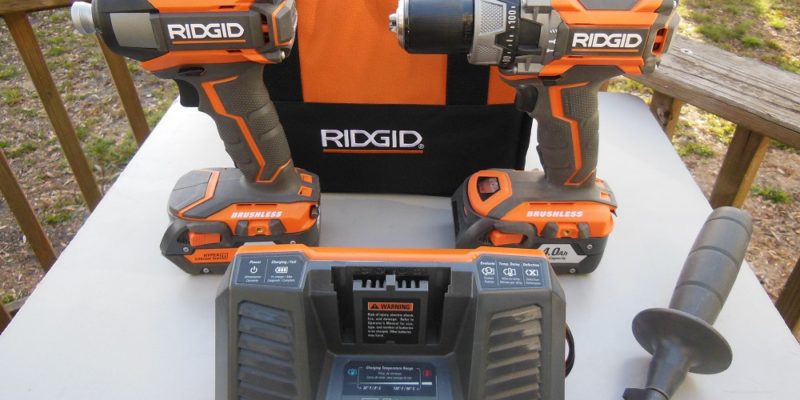 This post is sponsored by The Home Depot. If you’ve ever made holes or driven fasteners for work or play, you know the value of a quality power tool. The Ridgid R9205 brushless 18V compact hammer drill/driver and 3-speed impact driver combo kit we received for evaluation is a pair of high torque, compact tools sure to impress even the most skeptical. If “high torque compact” doesn’t garner your attention, the two 4 Amp-Hour lithium-ion battery packs, lifetime warranty (even on the batteries), and saved greenbacks are even more reasons to give these safety orange monsters the respect they deserve.

The overmolded rubberized grips are perfectly shaped and sized for my average-sized claws, uh, paws. And the GEN 5X brushless motors nicely counterbalance the beefy battery packs, for tools that feel quite badass in the hand.

While these are billed as “compact” tools, they can still wear you out if you’re holding them up high for extended periods of time. With the batteries and belt clips attached, the hammer drill/driver weighs in at 4lbs, 11.7oz. The impact driver, 4lbs, 1.8oz. They do contain some gravity, but it’s pure lean muscle. They’ve been working out; and it shows.

These beauties are part of Ridgid’s GEN 5X 18V lineup. They’re larger than a lot of compact drivers, but shorter – front to rear – than their full sized cousins. They are also powerful enough that you’ll forget you’re using a compact tool. Ridgid boasts “Best-in-class torque in a compact size“. After using them, I’m a believer.

Not only are the motors relatively small and surprisingly brawny, but the brushless design yields up to 50% longer run time from a battery charge. And no brushes to wear down means they will potentially outlive traditional brushed motors by a substantial margin.

From Ridgid.com, here are the specs:

Ridgid R86116 is an upgraded version of an earlier Ridgid tool. This one has a brushless motor, which is more efficient, slightly smaller and lighter than the earlier iteration. There’s also a new chuck design.

There are three operating modes: hammer drill, driver and standard drill mode. The selector switch is accessible from either side of the motor, making it convenient for right or left handers.

This unit has impressive power for its size. I was drilling 7/8” holes, 4 inches deep into the end grain of an oak stump at a pretty rapid pace with no problem. And that was with a dull spade bit. Not surprisingly, a sharp bit worked a lot better. Then again, they usually do.

The R86116 has a micro-adjustable clutch that’s engaged when in driver mode, giving you about 100 different settings for extremely precise control over fastener depth!

From the instant you try boring through masonry with the R86116 hammer drill, you’ll realize this is no ordinary compact driver. It easily – with no effort – pierces cinder block with a 1/2” masonry bit in, literally, 2 seconds.

After 74 1/2” holes through block, the battery’s charge indicator was still at four bars, just about to dip to three.

What’s Up, Chuck? How About A Little Extreme Testing?

The R86116 hammer drill/driver has a 1/2” ratcheting keyless Jacobs chuck that does a great job of grabbing and holding onto bits. The only time I had it come loose was once during some abusive testing, which we’ll get to in a moment.

If you’re not used to a ratcheting chuck, it may feel weird at first. But it quickly becomes a familiar friend. When the jaws first cinch, the collar pops into ratcheting mode. Then, as you continue to tighten it, you hear and feel the teeth kicking in, clinching the jaws like a vise.

The only thing I don’t like about the chuck is that the fine knurling can make it hard to get a good grip if your hands are a little oily. Luckily, it takes little force to sufficiently tighten and loosen, so that’s generally not an issue. However – if you forcefully overtighten it – it can be difficult to break loose again with your bare hands.

For sport, I popped in a fully charged battery, chucked a super-cheap, slightly-wobbly-shafted, dull 7/8” spade bit and decided to see how it fares against a really hard white oak stump. I would not normally do this (and neither should you). But, you know, I’m impressed with the tool so far. So let’s push things more than most users do and see what happens. Keep in mind that Home Fixated-style testing is not covered under warranty.

During this worst case scenario, I purposely applied too much downward force on the drill (more than you normally would). I ran the bit and driver – mostly in hammer mode – really hot (a lot hotter than you should) and with only a few brief breaks. I definitely abused it. Don’t try this at home. I was willing to risk it for review purposes only.

Even with an already-damaged, bottom of the barrel bit – combined with too much heat and force and super hard end grain wood – I was still able to plow through 20 holes (4-1/4” deep) before the battery was exhausted. If your real-world usage matches those absurd conditions you might be doing it wrong.

The excessive pressure I applied in hammer mode loosened the chuck once. So I cruelly over-tightened it in response. The only problem I had as result was that it was difficult to loosen again. So I enlisted the aid of a soft jawed vice. It didn’t take much force, just a bit more than I could manage with the grip of my hand alone. Use yours properly and you shouldn’t have this problem.

The other tool in the R9205 combo kit is Ridgid’s R86037 impact driver. Sure to make a huge impact on your workload, not your wallet. It uses the same powerful GEN 5X brushless motor but has a 1/4” bit holder instead of a chuck. The hammer drill delivers 27,300 striking blows per minute along the axis of the bit to help break through hard materials. The impact driver, on the other hand, packs its oomph into rotational energy, for a whopping 2,250 in-lbs of torque.

The R86037 only does one thing: it twists in the forward or reverse direction. But it does so extremely well. Screws that make my other drivers cry for mommy call this baby daddy.

Unlike the bit holders on some 1/4” drivers, this one is incredibly easy to operate one-handed. To insert a bit (use only impact rated bits having a locking groove), simply push it into the holder and it locks securely in place. To remove it, pull on the collar and the bit springs out into your hand. I doubt it could get any easier than that.

There are 3 speed/torque ranges to choose from, depending on the job at hand:

Medium and high speeds each drove standard 3-1/2” deck screws into pressure treated 4×4 – without pilot holes – like it’s nothing. That’s no easy task. Before this, the most powerful driver I owned gets them halfway (or less) before taking its ball and going home. Are my old impact drivers just wimps or is this the new playground bully? Apparently, it’s a little of both. And I’m OK with that.

Without pilot holes or countersinks, these screws take quite a beating and I knew I’d have to throw them away after this test. The R86037 impact driver clearly had plenty of power to sink them flush in this scenario. I used the driver for some more typical tasks and, as expected, it had absolutely no problem.

There’s one more common feature I’d like to point out: the dual grip switches/triggers. Both tools feature variable speed triggers and switchable speed ranges. They are both reversible and have trigger locks. The triggers activate the LED lighting, which stays active for about 10 seconds after being released. This is all fantastic.

I really love these tools and how well they perform. But I dislike the lower grip button, the one whose sole function is to turn on the LEDs. In my opinion, it should be rendered inactive when the motor trigger is locked, as it’s easy enough to turn on the lights by squeezing the trigger; even locked.

Some may like the presence of this oddly located, redundant feature. Personally, I find it mildly annoying and unnecessary. It’s almost impossible to pick them up by the grip without inadvertently powering on the lights. And in the storage bag, things – such as the charger – are prone to initiating the lights far too easily.

I understand why they have the light switches. But I wish they were located elsewhere, where you can activate them if and only if you actually want to. A bit overzealous with the lighting situation? I think so. But a deal breaker? Absolutely not.

You can bag a great deal with this kit. Unfortunately, the included carrying bag is just meh. I guess it’s true what they say about great things coming in plain, divider-less carrying bags that don’t keep things separated or prevent the charger from constantly pressing the LED light triggers. Wait, that’s not what they say? Well, maybe they should.

At least you get a handsome padded, zippered carrying bag; that counts for something. Right? In fairness, if you put only the tools with attached batteries into the bag, it works just fine. Or you can detach the batteries and stuff the bag as full as you’d like.

For high-powered tools on a compact budget, it’s hard to go wrong with either of these drivers. They are truly powerful beasts. All Ridgid 18V tools are compatible with all Ridgid 18V batteries. And when you register your purchase online, you get free service, parts and replacement batteries for life. That’s a epic warranty that can’t be beaten. I’ve actually used their warranty to get replacement casters for my Ridgid R4512 table saw after owning it for nearly 6 years. It was painless and hassle free.

When you depend on your tools, you can trust these to get the job done. Despite my few minor complaints, I can’t help but admire them for the great tools they are.

Stay tuned, because we’ll also be giving away one of these Ridgid kits on Home Fixated soon too!

Buy Now - via The Home Depot