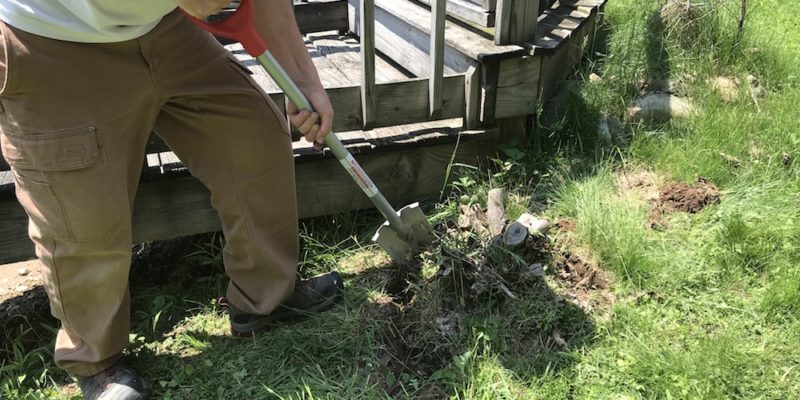 In the ongoing quest to root out unwanted roots, most gardeners are willing to employ any means necessary to put their roots six feet under. Or to get them OUT from six feet under. We recently took a look at one tool in the battle against subterranean tendrils, the Root Slayer. It’s not the only enemy of the trip-inducing tubers, though; when it comes to root annihilation, the Root Assassin folks claim their shovel is the original and the best. We’ll take a look at the Root Assassin shovel, and then you can root for your favorite.

Designed to be equally at home annihilating roots in gardens, forest or brush, each edge of the Root Assassin shovel has 16 sharp teeth. To speed up your assassination attempts, the teeth are angled and designed to cut in both directions. The bottom edge of the shovel blade is also nice and sharp, and actually works very well to sever small to mid-sized roots, without even needing the vicious killer teeth. If any of the cutting surfaces get dulled after dealing with a yard full of roots, they can be sharpened with a grinder or wheel.

Like its big brother, the One Shot shovel, the top edge of the shovel blade is folded forward, creating a little ledge or wing. It’s a simple design tweak, but it makes a big difference in how much force you can put into the downstroke – and in how the edge of the shovel feels on the sole of your foot.

The handle and blade on the Root Assassin are made of solid structural carbon steel, and they feel very robust. The D handle on top is made of solid red plastic, riveted onto the steel handle. It feels very sturdy, and has a rubber overmold on top, which makes the shovel more comfortable and less likely to slip. Here’s the official spec list, and a short promo video from Root Assassin:

The Root Assassin Gets Its First Dirty Job

For its initial mission, I introduced the Root Assassin to a thick root growing very close to our foundation wall. The tree the root had once fed came down in a storm a few years ago, and the root had been spared this long because it was out of the way. Also because it would be such a pain in the neck to get at; the root had actually wrapped itself right around the corner of the foundation. This is the type of root my pickaxe loves to bounce right back off of, sometimes with unhappy results.

I picked a spot near where the root dove underground, put the edge of the blade up against it, and stomped on the shovel. The Root Assassin plunged right in, and made a nice starting cut in the root. I pulled it back up, keeping pressure on the root, and stomped it back down. After two or three repetitions of this process, the root was severed. Woohoo!

There was an offshoot where the root went around the corner, so I got the blade under it and quickly sliced it off. Then it was ‘round the bend, where I tackled the other end of the root. It was right up against the wall, a tricky spot to get to, but in less than a minute the Root Assassin had finished its deadly work. The root was out, and all easy peasy.

The Root Assassin Goes After The Capo Di Tuti Rooto

Now that it had its first kill, it was time for something a bit more challenging. It’s been said that money is the root of all evil. Sometimes, though, ROOTS are the root of all evil, as demonstrated by a couple of firmly-rooted thorn bushes at our farm. I had cut all the branches off last fall, but after fifteen minutes of hacking at the roots with my pickaxe didn’t phase them a bit, I decided to give them the winter to ponder the error of their ways.

Unfortunately, they were still there in the spring. I decided to tackle the root that was trickiest to get at first, to get it out of the way. It was located near part of the deck that used to surround our pool, until a windstorm worked its magic on it last fall. Obviously, snow isn’t the only trick Mother Nature has up her sleeve. I first used the Root Assassin to cut around the circumference of the root ball, then dug away some of the dirt around it and tried to undercut it, since it was still solidly in place.

The Root Assassin shovel worked very well, and held up nicely, despite my jumping on it, and standing on it swaying back and forth with my 200+ pound bulk atop it. Finally, with a combination of the Root Assassin and my trusty pickaxe, the *&^%$#@ root gave way.

There’s no way I would have gotten it out with the pickaxe alone; too many large roots at bad angles, and the axe just bounces off. With most of the prep done by the Root Assassin, and the final prying by the pickaxe, humanity prevailed.

It had taken over two hours to get the first root out, and since the temperature and humidity were both in the upper 80’s, I decided to give the other root ball a temporary reprieve, and went in search of some Aleve and an appropriate beverage.

Ready To Put Out A Hit On Your Roots?

I’m a sucker for a well-designed, well-made tool. The Root Assassin shovel qualifies in both regards. It feels sturdy as hell, and it does the job it was designed for very well: Slice out those #^(%!*$ roots! I stomped on it, twisted it, and generally abused the heck out of it, and the Root Assassin was still in fine shape when all the roots had been laid to rest.

If you do manage to destroy it, not to worry. The Root Assassin shovel is covered by the same no BS guarantee as the One Shot shovel: If for any reason you are not satisfied with it, they’ll replace it free of charge for life. You can also exchange the Root Assassin for any other item on their website. Like maybe the Mini-Me version of the Root Assassin, the more compact Mini Root Assassin.

I didn’t get a chance to get a hands-on tryout of the Root Slayer shovel. Our fearless leader Marc, who dwells in the inhospitable climes of San Diego (hey, we can’t all be lucky enough to live in the Persistent Snowband south of Lake Erie), tried it out on a yard full of laid-back California roots. All I know is, the Root Assassin kicked butt on our very hardy northeast roots. And by the way, the Root Assassin was the winner of the Golden Shovel Award by Garden Products Review. That seems good, right? Anyhow, if you’ve got unruly roots, let the Root Assassin cut your underworld problems down to size. Then settle back and enjoy a cold, frosty mug of root beer. Possibly omitting the root. 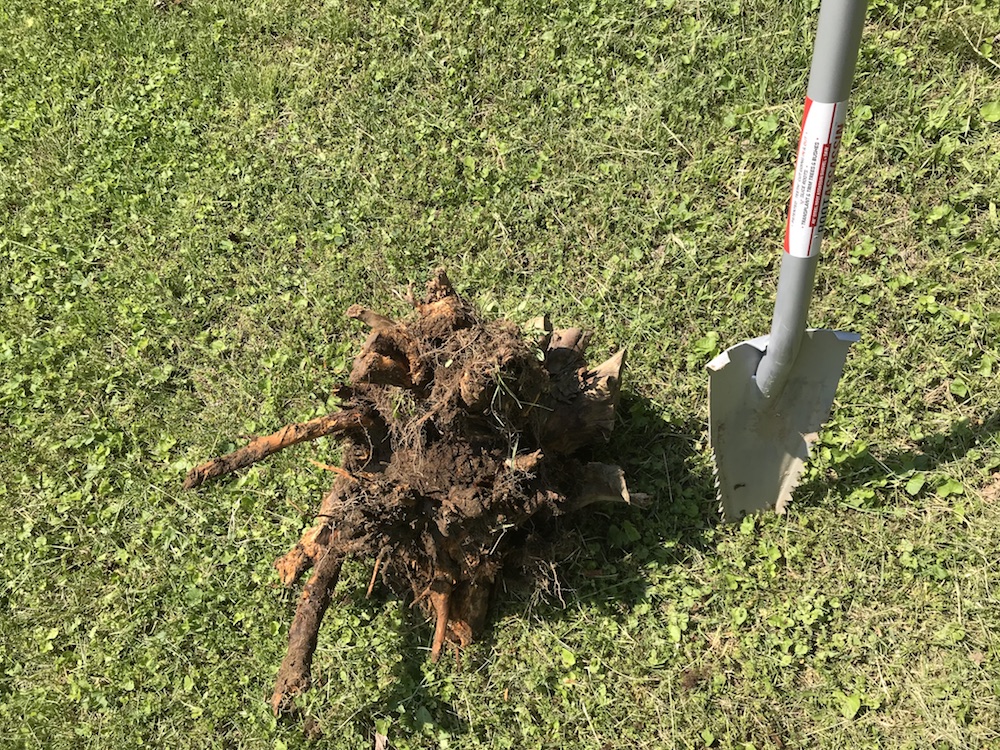