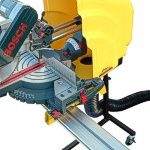 Alright so the title may be a little misleading, but the Rousseau Downdrafter does collect the dust from a miter saw extremely well. I do love seeing things re-purposed though. I mean I haven’t seen anything like that since the last time I was getting my hair dried at the beauty…since that time I saw that movie about that beauty…since my wife told me what happens at a beauty salon. If you have ever spent anytime using a miter saw you know that dust control is near impossible. Within seconds of using a miter saw, you and your shop get covered in a layer of sawdust thicker than the layer of cocaine on Tony Montana’s tabletop.

What the Downdrafter misses in beauty it makes up in functionality. It has a four inch flex tube to hook up to your dust collection setup and it has two different designs to conform to your shop set up. The first one is a portable Downdrafter on a pedestal with locking caster wheels; they like to call it the 4550 pedestal model. I’d like to call it the Binford 6100 model but I guess I don’t really have much say in it. The other is the 4500 Bench Style, which as the name suggests attaches to a bench. In fact, it can attach to any number of workbenches as well as the Rousseau portable bench (handy).

Both models can pivot 360°, which may be overkill for a saw that at best can pivot 60°. However, looking at some of my projects, I have no room to talk of overkill. The Bench Style also has the capability to slide back and forth along the bench just in case you want to move your saw back and forth. I will recommend that you measure twice before buying the mini opera house because it is 19 inches deep making your miter saw sit out even further than it already does, (unless you’re the lucky owner of a Bosch Axial Glide, in which case your saw doesn’t sit out very far).

Oh, and by the way, in case you want to see the Downdrafter in action. Rousseau apparently teamed up with the Timbuktu Middle School AV Club to produce this gem. Despite the Oscar caliber video, the Rousseau Downdrafter looks like a pretty good product to manage your miter saw dust issues. And, don’t take my word for it, take a look at what Shop Notes has to say about the Rousseau Downdrafter.

We couldn’t find this thing in stock anywhere, so it looks like you’ll need to contact Rousseau directly for your Downdrafter action. Either that, or make your own by salvaging parts from a defunct beauty salon.