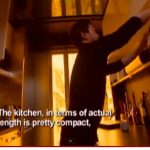 Whenever I watch those House Hunters and Property Virgins shows on HGTV, I’m often blown away by how large the homes are for such little money. And yet, the homeowners who are hmm’ing and hawww’ing over these deals often complain about rooms being too small. 2100 square feet of home is too small? For a couple? Ugh. Sometimes us North Americans are the worst. And nothing demonstrates that more than a cool video from the other side of the world: a teeny tiny apartment in Hong Kong that manages to have the functionality of a 24-room home.

Gary Chang is an architect who lives in this 344 square foot apartment. The small space utilizes what he calls Domestic Transformers to turn one room into an entirely different one. No, these Domestic Transformers are not Optimus Prime and Megatron in frilly aprons – they’re a set of storage walls that roll out, reveal or conceal elements like his bed, bathtub, or kitchen counter and thus turn the space into something new. See it for yourself:

Pretty cool, eh? And there’s no chance that this guy or anyone living in a home like that will ever appear on Hoarders, so they have that going for them too. Overall, compact living makes a small footprint and uses less energy to heat, cool and light than larger homes, so it’s also a green choice besides an economical one.

While this home is an extreme example of compact and “transform living”, examples of this vein of ingenuity can be found in North America in features like Murphy Beds and fold down wall tables. I personally haven’t come across anyone who floats their walls around, but I’m sure somebody’s doing it!

If you know of more examples or have engineered your own smart, multifunctional rooms or furniture pieces, let us know!