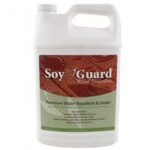 Call me a wimp, but when half of the stuff on the shelf in my garage is “known to the State of California to cause cancer,” I get nervous. In a market where the products used to build and maintain a home are considered “safe” only if I remember to keep them away from heat, provide adequate ventilation, and wear rubber gloves, a respirator, safety glasses, and a necklace strung with cloves of garlic, it’s refreshing to find nontoxic alternatives.

SoyGuard deck sealer and water repellent is different from most of the petroleum-based stuff on the shelves of the local hardware store (or the shelves in my garage) because it’s made with methyl soyate, a derivative of soybean oil. The SoyGuard line has a VOC (volatile organic compound) content of less than 50 grams per liter, which is ultralow compared with most solvent-based sealers that have VOCs of 200 g/l or more. It’s nontoxic, nonflammable, biodegradable, and low odor (it smells like cooking oil). It won’t deplete the ozone layer, and it cleans up with soap and water.

Despite being as docile as a puppy, though, SoyGuard deck sealer and water repellent still manages to protect wood against swelling, warping, cracking, and checking for up to two years. The manufacturer claims SoyGuard can be used to treat decks, siding, furniture, fencing, and wooden doors, and it is compatible with every type of wood from southern yellow pine to ipé.

The folks at BioPreserve also tell me that SoyGuard is safe enough that you can drink it. I’ll probably still grab a cold beer after sealing the deck, but it’s nice to know I have options. You can find SoyGuard in both one gallon and five gallon sizes for $29.99 and $133.99 respectively. SoyClean also has other natural alternative non-toxic products available on their site.

Guest Author Justin Fink is sometimes referred to as the “Indiana Jones of the Tool World”, but that’s mostly because he carries around a worn satchel to media events and trade shows (he rarely wears Fedoras, and claims he doesn’t even own a bullwhip)! When he’s not busy showing off his master carpentry work on Facebook, Justin plays the esteemed and worshipped role of Senior Editor for Fine Homebuilding, and also blogs at ToolHound.