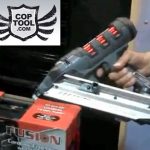 Our friend Jay over at CopTool.com recently went to the Specialty Tools & Fasteners Distributors Association (STAFDA) 2009 Show. That’s good news for HomeFixated readers, since I was apparently too lazy to hop on a plane and go to the show this year. Thankfully we can all benefit from CopTool’s trade show diligence. While at STAFDA, Jay came across a line of Senco nailers so new, they’re not even on the Senco website yet. In fact, there’s very little mention of them anywhere online.

CopTool captured the video below of a Senco rep giving a run-down on what appears to be a very exciting new product, especially if you’re not into dragging a compressor and air hose with you everywhere. Currently they’ve got 15 and 18 gauge models scheduled to hit the market this first quarter of 2010.

When I first saw them, I assumed the very visible gas cylinder was going to be something that needs to be swapped out or recharged regularly. Apparently that’s not the case. The Fusion nailers use a sealed Nitrogen system that continually uses the same gas (along with a little 18v juice from a rechargeable battery). Very intriguing! Thanks to CopTool.com for the scoop!

The folks over at Tool Hound (run by Taunton press) also apparently did some reconnaissance and dug up a few more details for their article on Fusion nailers too, including estimated pricing around $350-$400 and some additional photos. Stay tuned, we hope to have more details on the Senco Fusion cordless nailers as they develop.