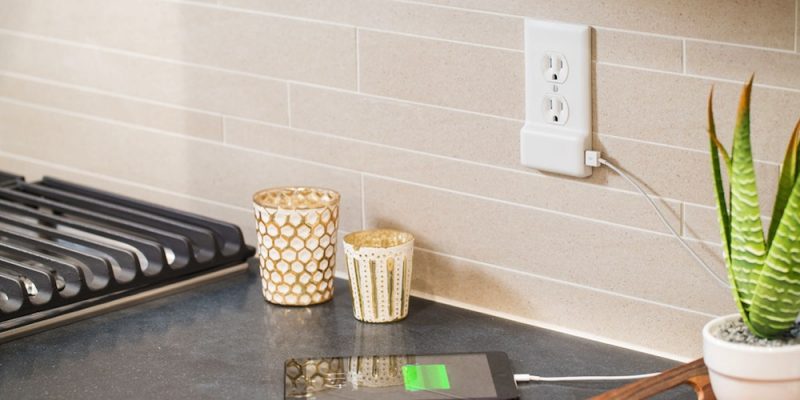 Ask the average American what they feel is the most pressing issue facing this country today, and the answer will likely be: USB device proliferation. Okay, the AVERAGE American may not feel that way, but there are probably a few tech junkies scattered around, possibly needing their meds adjusted, who hold that viewpoint. In any event, many households have a LOT of devices requiring replenishment via a USB drip, and frequently the supply of convenient outlets is scarcer than a Democrat who watches Fox News. With the introduction of the SnapPower USB Charger, there’s now a quick and easy way to add a USB charging port, without losing a receptacle.

The technology and design of the SnapPower USB Charger is similar to that of the SnapRays Guidelight we looked at a bit over a year ago. The Guidelight is almost indistinguishable from a standard outlet cover plate, but there are three small LED lights built into the bottom of it. A built-in light sensor turns it on when it’s dark, and off when it’s light. It shines a nice little pool of light downward, and the low-power LEDs cost about ten cents a year to operate! The best part? It doesn’t tie up an outlet, and installation takes about a minute, and requires no wiring.

The SnapPower USB Charger gets its power through the two springy little arms extending from either side. These little arms make contact with the screw terminals on the outlet, and Boom – you’re powered up! Well, hopefully not LITERALLY Boom; if so you may need to have your wiring checked. Here’s a quick video overview:

All of our kids have grown up (more or less), moved out, and become self-supporting productive members of society (woohoo – especially the “self-supporting” part!). Since it’s now just my wife and I living here, keeping our stuff charged shouldn’t be that big a deal, right? Here’s the list of devices greedy for USB juice: My phone, my wife’s personal phone, her work phone, my iPod, and her iPod. And when the kids come to visit, multiply that by…a lot.

The traditional prime charging station is an outlet near the end of the kitchen counter, by a seldom-used bar sink. Normally, there are at least two phones questing for power, joined periodically by a baby monitor, a crock pot, an oscillating fan (in the warmer months), an iPod or two, and various other small kitchen appliances.

Unfortunately, the prime charging outlet is a GFCI outlet, and that type of outlet is not compatible with the SnapPower USB Charger. There are four other outlets along the countertop, but they’re either already spoken for, or located where having chargers plugged into them would elicit swift, merciless retaliatory action from the Mistress of the Kitchen.

Undeterred, I went right to the backup charging venue, a table in our hallway. While there’s usually a lamp plugged in there, unplugging it is FAR less likely to bring on painful repercussions. During periods of peak charging demand, the lamp gets a break, while some combination of mobile phones and MP3 players receives an electron transfusion. This seemed like the perfect spot to add some capacity.

Got A Minute And A Screwdriver?

The beauty of the SnapPower USB Charger is how simple it is to install. Other USB outlets require you to remove the cover plate, pull the receptacle out of the box, disconnect the wiring, carefully re-wire the new receptacle and fit it back into the box, and replace the cover plate. With the SnapPower USB Charger, you perform only the first and last steps. It takes literally one minute.

I unscrewed the old cover plate, pushed the new plate into position, and secured it with the provided screw. Then I started plugging stuff in. Wife’s iPod? Check. My iPod into the SnapPower USB charger port? Check. Lamp, to ensure domestic bliss? Check. Truly simple and fast, so much so that it’s easily doable by any homeowner. Or apartment dweller, for that matter – just swap the old cover plate back in when you move!

I received two of the SnapPower USB chargers to evaluate. Unfortunately, they are white and all of our outlets are ivory. The SnapPower USB Charger I installed in the hallway will remain there, but I’ll swap out the ivory receptacle for a white one. The other one will take up residence behind my bedside table. Since it’s hidden, maybe I can get away without changing out that outlet; we’ll see if anyone notices. Presently, there is a lamp, a phone cradle, a window candle and an alarm clock plugged in there, thanks to the miracle of splitters. Now I’ll be able to let my phone join the fun! (By the way, it looks worse than it is. The candle light uses a 5w bulb, the alarm clock and phone cradle use very little power, and the lamp is almost never used).

According to the SnapPower folks, the SnapPower Charger charges all devices that use standard USB. Charging times will vary depending on the actual device being charged, size of battery and manufacturer. However, it should be similar to any brand name one-amp charger on the market. SnapPower reps say the charge time is comparable to the one-amp Apple charger that comes standard with the new iPhones 6 and 6 Plus. Per their testing, charge time for the iPhone 6 was two hours, and for the iPhone 6 Plus, three hours. Similar to other USB charging devices, the Charger has built-in surge protection.

The SnapPower USB Charger is available directly from SnapPower. Pricing for standard duplex and Decora versions is the same, and you can get them individually, or save money by getting a multi-pack. Prices range from $19 for a single charger to $15 each when bought in a ten-pack. They’re sold in packs of three, five, or for the truly wired household, ten, and are available in white, ivory and almond. The SnapPower Charger comes with a 1 year limited warranty. 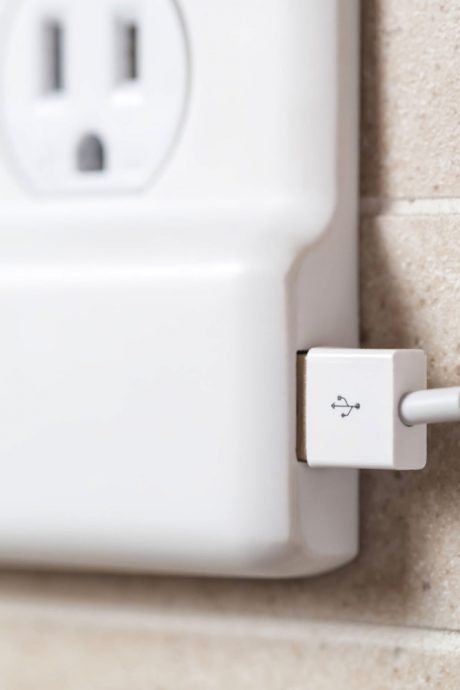