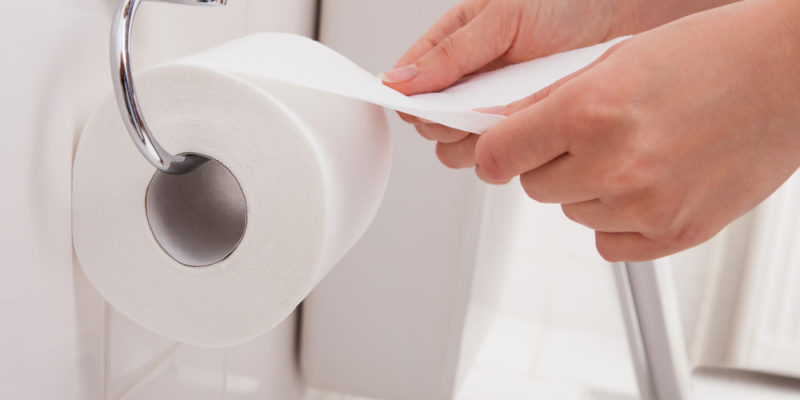 With all this joking on HomeFixated, I decided it was time to answer a serious question that has plagued millions of people worldwide: What’s a better way to hang toilet paper, over or under the roll? The first thing that came to mind in answering this vexing question, was to consult my friend Dr. Michael Sykes, who happens to run ICBE.org, that’s the International Center for Bathroom Etiquette for those of you not yet hip to the ICBE. Sadly, Dr. Sykes favors the “under” method. Despite his personal bias, his article Hanging the Toilet Paper, delves into several pros and cons for each option. It’s a must read as you begin to explore this vital issue that threatens our domestic peace and national security.

As you may have guessed, I’m for the “over” method of toilet paper hanging. I don’t like groping bathroom walls in an effort to get the toilet paper, and I’m known for my aesthetic biases. As you no doubt learned in the ICBE article, most hotels favor the over option. It’s especially favored by those hotels that have their staff fold a little triangle in the end of the toilet paper. Nothing says you care about customer service like a little origami in the toilet paper. For me, it’s about practicality and aesthetics. Problem solved, the solution is clearly “over”, right? Not so fast. Those in the under crowd, make several valid points that need to be considered.

One argument frequently heard for those lobbying the under toilet paper position, involves pesky toddlers and aggressively playful disobedient felines. I can vouch for the pesky toddler problem. I happen to have one of those, and she loves giving the toilet paper a swift yank, often resulting in about 50 feet of toilet paper streaming all over the bathroom. The bath suddenly looks like the tp’d front yard of a particularly despised grade-schooler. It’s a very valid point. I don’t happen to have an aggressively playful feline, but supposedly they are similar to toddlers in their disregard for cautious toilet paper dispensing. So, problem solved, it’s under, especially if you have the aforementioned toddler or feline issue, right? Not so fast again!

According to a ToiletPaperWorld.com survey on hanging the toilet paper over or under (I’m not making this up), 68% prefer the paper going over the roll, while only 25% prefer it going under the roll. You can also find out other fascinating stats like the breakdown of toilet paper “wadders” vs “folders”. Who knew? Anyway, it seems the majority has spoken, and that majority likes the free-hanging, easy to grab action of the toilet paper hanging over. Hurray, the “over” toilet paper team triumphs!

But wait, there’s more! Dr. Sykes gives some parting over vs. under advice that makes a lot of sense. If you’re single, do whatever you want. Heck, if you’re single feel free to mount your toilet paper roller vertically and then dispense it sideways (gasp!). Or, you could even use actual origami to wipe with. Consider toilet paper orientation one of the glorious freedoms that comes from being single. And, if you have a significant other, you may wish to heed their preference in order to better achieve domestic harmony. . . . just as long as they want the toilet paper over the roll. Feel free to weigh in with your thoughts and opinions on the comments section below.