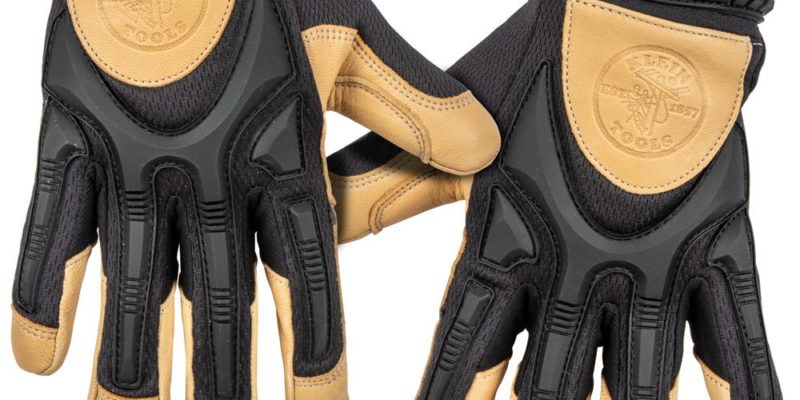 Here at Home Fixated, we love taking on projects that are a bit out of our comfort zone. Like that time a few years ago when we decided to add a 2-story deck to the house, despite never having built anything larger than a spice rack before. It’s these types of projects that help us realize that we’re capable of far more than we realize – and that with the right mindset, the right knowledge, and the right tools, we can accomplish impressive things. In this installment, we’ll learn about a new line of protective gloves from Klein, two new pieces of Milwaukee equipment, a new evaporative cooler from Big Ass Fans, and a PPE-related collaboration from 3M and DEWALT. Let’s get to it!

Klein is launching what looks to be a well-thought-out line of protective work gloves. Included will be ergonomic heavier leather gloves and two types of cut-resistant gloves. The heavier gloves will be made of goatskin leather for dexterity and suppleness. The cut-resistant gloves (either ANSI A2 or ANSI A4 cut resistance) feature touchscreen capability so you can stay connected at the job site. They’re available now.

A few installments ago, we revealed Milwaukee’s plans to launch a brand-new line of heavy-duty cordless equipment: MX Fuel. The MXF314 14” cutoff saw is a component of that line. With up to a 50% reduction in noise and a similar cut speed (as compared to a typical gas-powered saw), the MXF314 seems like a viable replacement going forward.

I’m having a hard time believing that I actually just typed “Cordless Breaker”. It represents such a quantum leap in tool technology and usability. Prior to Milwaukee announcing the release of the MXF368, I never would have thought that a breaker, of all things, could ever be untethered from a hose or cord of some type. However, with up to 50 ft-lbs of impact energy and the ability to break up to 2 tons per battery charge, Milwaukee’s new beast proves yet again that cordless tools are the way of the future. It’s available now.

Big Ass Fans Wants To Cool You Off This Summer

Already in possession of probably the best name in the industrial equipment world, Big Ass Fans is launching what might be the best line of evaporative coolers in the industry. These types of coolers, also known as swamp coolers, work by drawing air through a water-soaked pad, thus forcing the air charge to cool off via evaporation. The cooled air is then circulated by a fan. With 4 different sizes, the new line is able to cool an area of up to 6500 ft2. All 4 models feature large water reservoirs and ultra-efficient motors as well. They’re available now from Big Ass Fans.

Closing out this Tool News Nirvana is some “news” that’s a few weeks old, but still neat nonetheless. PAPRs, or powered air-purifying respirators, have become incredibly important for frontline workers like doctors and nurses during the pandemic. However, supply for these devices hasn’t always kept up with demand. Two companies that are well-known in the home-improvement world, 3M and DeWalt, have partnered with Ford to quickly develop and ship PAPRs to those that need them most. The design is interesting: a seat ventilator fan assembly from Ford, a 20V MAX battery from DeWalt, and a face shield, hood, and bio-suit from 3M. Here at Home Fixated, we’re huge fans of collaboration, especially when it involves major industry players banding together for the common good.