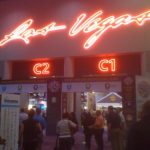 Ah Vegas. Remember not so long ago when Las Vegas was being marketed as a family destination? Now, not so much. I saw approximately two young children being wheeled around the Strip by parents who apparently didn’t get the memo. Luckily the kids appeared to be passed out, immune from the continual flow of nude women on cards being handed to their fathers every 20 yards or so. After chatting with some of my media friends and hearing stories of being literally chased into elevators by ambitious prostitutes, I was a little disappointed I wasn’t solicited myself. Not because I would have accepted of course, (my wife occasionally reads this), but mostly for the shear novelty factor. However, I was solicited by many eager product spokespeople at the 2011 National Hardware Show (in a good way), and, I wasn’t above selling myself a few times as well. For all (actually, just some) of the juicy details, read on.

In case you weren’t glued to Twitter for our live coverage Tuesday and Wednesday, you can find a quick recap of some of the more interesting products we stumbled across (no, we weren’t drunk), in our medley of 2011 National Hardware Show tweets. In two days of show coverage, we posted a total of 40 tweets, almost all of which had low-res but hopefully still useful images linked to them. After talking with close to 100 people in detail about their products, my brain feels a bit overloaded with product info. I’ll mention a few stand-outs below, but the reality is there were many more standouts than we’re mentioning here. The good news is that for many of those not mentioned here (and some that are), we’ll be working on some hands-on reviews and more in depth coverage of great new stuff discovered at the 2011 National Hardware Show. 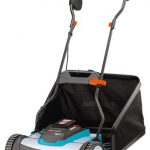 This year I managed to make it to the Outdoor/Lawn/Garden section of the show. It was another massive exhibit hall, with lots of great innovation. Gardena was a definite stand-out. I almost breezed right by them thinking, “Oh, they make fancy hoses.” Instead, I stopped in and was brought up to speed on one clever innovation after another on everything from pruners with adjustable opening size for small to large hands, to power-assist cordless reel mowers, to watering systems that accurately water irregularly shaped lawns. Many of their products actually had 20+ year warranties. Yes, you read the correctly. Until we have more coverage on HomeFixated, check Gardena out for yourself.

Promising to rid you of deer, gophers and even dogs and cats with a lasting deterrent you don’t need to reapply frequently (like most sprays). If only I had these before the dog poop incident. More details at Plant Pro-Tec. 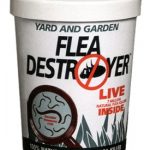 Also in the garden-verse, one of our more enlightening conversations was held with Orcon, or Organic Control. They sell a variety of beneficial garden critters including ladybugs, nematodes, predatory mites, and more, several of which we hope to review on HomeFixated in the coming months. Stay tuned!

Worx
Mating a chain saw and the mouth of a metallic alligator, Worx showed off their Jaw Saw. From the demo at the show, it looked like a very comfortable way to cut downed branches. More on the Jaw Saw via WorxTools.com

Dual Saw
Infusion Brands was there with the ultra-marketed Dual Saw, as well as a new smaller version and larger version. Since the regular Dual Saw was shown sawing a car in half in their infomercial, we can only assume the grande Dual Saw can cut a locomotive in half. For a little video of all three sizes, check out InfusionBrands.com 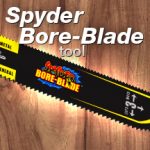 We wrote about Spyder Products not long ago, and got a chance to see their grout removal blade and new Bore Blade in action at the show. The grout removal blade made quick work of getting grout out, and is available in two sizes to fit varying width grout lines. The Bore Blade is a double sided bi-metal blade with a unique rounded tip, making plunge cuts and even reversing directions mid-cut a breeze. Looked like a great demolition blade. More at SpyderProducts.com

Gutster Demo Bar
Checking out the Gutster Demo Bar made me want to grab one and start destroying some booths. Since I still had people to talk to (and there was law enforcement on-site), I controlled myself and handled it without actually destroying anything. I was impressed with the solidness of this tool. Available in three lengths, there’s a Gutster suited to your every demo need, from tight quarters bath work, to open-air prying up roof shingles. Visit TheGutster.com

Bill Haug of the awesomely named Boss Haug Enterprises gave me a run-down on his innovative paint brush. A slotted and angled handle allows it to rest right on the edge of your paint can. It can also be connected to extension poles for hard to reach painting, and it’s angle makes it easier to paint in narrow spaces. Check out The Boss Brush.

StoneXpress
Makers of StoneSkin, StoneXpress combined Bondera with their attractive looking stones to make for a very easy to install lightweight natural stone product. They said it will install over virtually every sound vertical surface, including existing tile. And, they assured me it won’t fall off, despite my adhesive skepticism. More details via StoneXpress.com

AutoSlide
We’re coming out with a fun article soon on DIY automatic door opening, but it looks like AutoSlide has first dibs on a commercial version. We checked out their AutoSlide product which automatically opens patio and pocket doors either by motion, button, or power assist. They’ve even got a sensor that will open and close the door just for your pet! If you’re a trekkie, you’ll want to check out AutoSlide, and our upcoming article on door opening hacks. 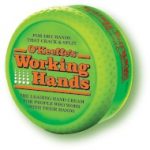 Let me be clear, I hate lotion. I even warned the nice team at O’Keeffe’s booth that I had a lotion phobia. After checking out some impressive looking before/after photo results, I buckled and even used a little myself. If your hands look like you a Chupacabra knawed on them and then you left them in the sun to bake for a week, you should really check out O’Keeffe’s Company’s line of products for Working Hands (and feet too).

Gorilla Glue
A new, nearly three inch wide duct tape from Gorilla Tape immediately grabbed our attention. This is serious duct tape. If you like to repair your car and house with duct tape, you’re going to go crazy for this stuff. The width makes it even more versatile for things like hole repairs too. Check out the new Tough & Wide Gorilla Tape.

Gorilla PVC
Also on-hand was Gorilla PVC with their low voc combo primer and pvc glue. Considering most pvc glue tends to melt my nose hairs, this is a surprisingly less noxious, one-step option for welding PVC pipe. I checked out their MSDS, and it’s a lot more tame than what I’d expect for a PVC glue. 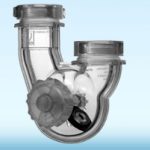 If you hate plungers, you’ll likely love PF WaterWorks’ new PlungeMax No Mess Plunger. It’s like a giant bellows that you place between the rim and the seat. When you close the lid, it forces air through and plunges, all without ever touching the water. If this thing works as well as it appeared too, it’s a very clever idea. PF WaterWorks also was showing off their clear, No Clog Drain called PermaFlow. A dial at the bottom can be rotated to clear any obstructions. They even demonstrated retrieving a ring with a grabber tool (something you can do since the unit is clear). Ingenious!

MyFixItUpLife
When one of my favorite magazine personalities (Hal from Extreme How-To) found out I was being interviewed on the MyFixItUpLife show, his immediate comment was, “Wow, they’ve really lowered their standards.” Actually, I think their standards are high, they just made an exception in my case. I’d highly recommend you watch the two people before me (the hilarious Chris Grundy of Cool Tools fame, and Roy Berendsohn, senior Home Improvement editor for Popular Mechanics). If you really insist on watching me squirm nervously, my interview kicks off at about 47 minutes. Mark Clement and his lovely wife Theresa both made me feel surprisingly at ease (I’m pretty sure one of them slipped a sedative in my drink, but I’m not naming names). Despite my getting bashful around recording devices, I had a total blast on the show. Be sure to check out the dynamic DIY duo that is Mark and Theresa at MyFixItUpLife.com.

It pains me I can’t mention all the great products we came across at the 2011 National Hardware Show, but rest assured more ongoing, in-depth coverage will be on its way in the months to come. In the meantime, just remember, don’t take your kids to Vegas.