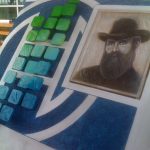 I just returned from a couple days of media-event-fun sponsored/hosted by Bosch at their HQ in Mount Prospect Illinois. Several new products were announced and the media had a chance to go hands-on with many Bosch (and competitor) tools. The GLT (Global Leadership Tour) was action-packed, with several highlights that will likely pique the interest of any fan of Bosch tools, or those that might just be Bosch-curious.

Q & A
Michael Springer, freelancer extraordinaire, and Tim Carter of AskTheBuilder fame apparently made a bet before the event on who could ask the most questions. Michael had questions so nuanced and detailed, I could see beads of sweat forming on Bosch product manager foreheads before Michael even finished each question. And Tim Carter single-handedly provided Bosch with strategy suggestions for routing all future tool sales through sites like AskTheBuilder.com, a global-domination-roadmap, and product suggestions for bringing perfection to every tool. I’m not sure who won the most questions/suggestions bet, but it felt like Tim Carter did. My hat’s off to whoever was taking notes for Bosch.

This year’s GLT provided ample room for dialogue between Bosch and the media. Prior to the event, a request went out to attendees to submit new product ideas for Bosch, with a focus on future tech. Nine ideas made the cut, with a winner standing to win an iPad 2. I’m sad to report I didn’t win the iPad (that honor deservedly went to Ethan Hagan of OneProjectCloser.com and his clever idea for a universal battery adapter). I am happy to report my contribution did make the final nine, and then the final three. As you might expect, my concept involved a substance near and dear to the hearts of tradespeople and DIY’ers alike: beer.

The HomeFixated Beer Tap-erator
My idea was inspired by the fact that Bosch actually makes a cordless wine opener (in Europe). . . a product I’m fairly certain one in about 500,000 US tradespeople might actually use. Based on my anecdotal observations and occasional personal experimentation, beer (like firearms and extreme sports), is closely tied with the trades in the US. Germany is also known for their great beer. These facts of course led me to a cordless Li Ion beer bottle cooling and micro-tap solution. I wanted to bring the draft beer experience to any beer bottle, all at the perfect temp, with a user-selectable head. You simply drop a bottle into the device, it’s rapidly cooled to a user-definable temp, a stainless tip then pierces the cap, and a patent pending (not really) draft simulator dials in the right amount of suds.

Bosch unleashed their talented design team on all nine concepts and they came up with some great renderings. 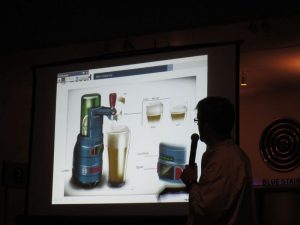 It was very cool to see them take words on paper and transform them into product concepts that looked ready to roll off the assembly line. After a flurry of suggestions, the Bosch team further refined the designs. Since Bosch thought my concept was “just for fun”, I may need to bounce the concept off Milwaukee Tools next month. If you’d like to see this critical piece of engineering considered for production (in Bosch Blue, Milwaukee Red or by someone that actually makes beer products), drop your name in a comment below! 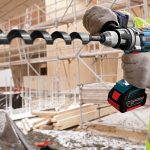 Making performance claims on battery life is all well and good, but don’t you wonder how much performance actually aligns with marketing slogans? Bosch decided to stage a battle between their next gen HC (High Capacity) Lithium Ion Drill vs comparable 18v models from Dewalt, Makita, and Milwaukee. Rows of 6×6″ pressure treated lumber were lined up and everyone had a chance to drill 3″ screws using all the drills. The goal: to find out how many screws can be driven on a single fresh charge. It would have made for an awkward moment if a competitor’s drill triumphed. Instead, Bosch won the contest handily at 519 screws, with 423 for Milwaukee, 399 for Makita and 318 for DeWalt rounding out the field. The contest got a little tedious in the Illinois heat, (in the end it was mostly Bosch folks driving the final screws), but it proved their point: the next gen of Bosch Li Ion batteries kick ass. Or, as Bosch would likely prefer, “perform superiorly.” 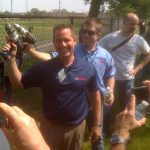 Sometimes tool companies do stunty things with their tools to prove a point. Dropping a drill at over 500′ from a hovering helicopter probably qualifies for being “stunty.” Bosch marched us across their parking lot over to an open field. A helicopter then appeared and made a few passes, eventually settling into a hover at a little over 500 feet. Bosch product managers then dropped two 18v drills onto a grassy field below. Impressively, both drills ran just fine after the drop. I did notice the batteries were taped to the drill, but presumably those would have turned into shrapnel, possibly taking out an editor or two if they hadn’t been fully secured. Considering this drop was done in front of around 40 media folks, I have to hand it to Bosch for staging a stunt that could have turned out pretty embarrassing if it hadn’t gone their way. The stunt did leave me with two lingering questions: 1) How many times did they test the drop before feeling comfortable doing it in front of a bunch of media? 2) If comparable tools from their main competitors were subjected to the same extreme drop test, under identical conditions, how would they have held up? We’ll be happy to cover or participate in any competitive helicopter drop tests if there are any takers.

Large Random Orbit Sander
When Bosch announced their new random orbit sander my adrenaline didn’t exactly spike. There are a lot of random orbit sanders on the market without a whole lot of external variation, so I wasn’t expecting anything blogalicious. Then I heard it had a swappable pad for both five and six inch sanding discs. My ears perked up. Then, a translucent dust canister that you can see fill up was mentioned (or you can hook it up to a vac). I’m still not sure how excited I am by the filter inside the cartridge. If it winds up holding up to a lot of cleanings, then yay! If it requires regular replacement I’ll be bummed. But the most ground-breaking feature was a de-coupled housing which promised serious vibration reduction (no matter your personal preferences, vibration is a bad thing when it comes to power tools). Bosch graciously put their competitors on the chopping/sanding block for comparison. Once I got hands-on with the new Bosch sander, it was clear the vibration reduction was no joke. The only sander that came close was the Festool, which was also very smooth but had a slight bit of wobble. The Bosch was icy, glassy, velvety smooth. It will be available solo for around $229 or in a kit for around $299. If you’ve ever sanded with a random orbit for literally hours, only to have your hands feel like they are having an out-of-body experience afterward, this is definitely a sander to check out.

Portable JobSite GTS1031 Table Saw (The saw has solid power, well designed accessory/fence storage, and, you can carry it in one hand).

New Reciprocating Saw RS428 (I tested Milwaukee and Bosch side by side and found their cuts to feel very comparable, both pretty smooth. )

Partnership with BlakLäder (Euro-designed pants with serious practicality and durability)

SmartHome (A showcase house at the Museum of Science and Industry that had a suspicious number of sweet stainless Bosch appliances inside).

and probably several other things I’m forgetting on my long flight back home (see select links below for more coverage of the event).

One of the best things personally in going to a media event like this (aside from temporarily satiating my tool use urges) is connecting/reconnecting with all the great media folks out there. If you’re not already hip to them, check a few of them out:

Hal “I once lit myself on fire for a tool test” Jones @ ExtremeHowTo.com

Jay “I sell more Bosch tools than any of you” Amstutz @ OhioPowerTool.com

Justin “My hotel has to be around here somewhere” Fink @ FineHomebuilding.com

Michael “I once screwed for seven hours, on a tool test” Springer @ Freelance Extraordinaire

Tim “Go ahead, ask me for a suggestion” Carter @ AskTheBuilder.com

Timothy “My blog doesn’t need “tool” or “home” in its name” Dahl @ Charles&Hudson.com

Chuck “I can autocross my pickup” Cage and Sean “It needs flames on it” O’Hara @ ToolMonger.com

Jude “I forgot my swimsuit but I’ll rent you a tool for a dollar” Herr @ Boulder Tool Library?

Rob “Some of us are aging” Johnstone @ Woodworker’s Journal

Bob “Tool companies fly me around the world” Hunter @ WoodMagazine.com

Tom “Take me with you to San Diego” Hammel @ ContractorSupply.com

Todd “There’s a buzz in my tool box and it’s not my iPhone” Fratzel @ ToolBoxBuzz.com

and all the other great people I couldn’t come up with a slogan for, great seeing all of you!

Check out our formerly-live Twitter coverage of the Bosch GLT 2011 event.

And don’t forget to drop a comment of support for the HomeFixated micro-tap concept below!