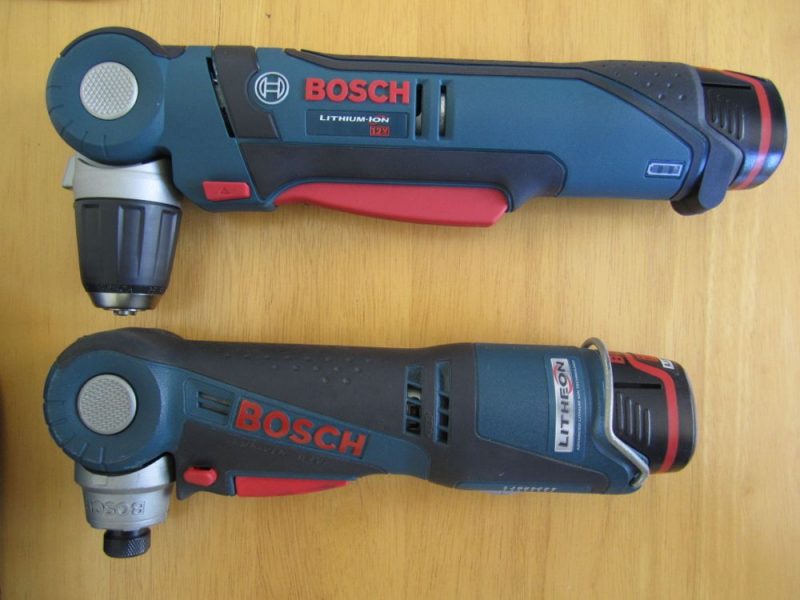 Way back many moons ago, in 2009 to be exact, we reviewed the Bosch I-Drive articulating head drill driver. The PS10 saved my bacon during a DIY duct installing that had some very difficult to access fastener points. The PS10 was great for what it was; a compact driver ideally suited for smallish screws and possibly a little small diameter drilling. But what if you wanted to key-up a nice beefy drill bit for running some Romex through a stud bay or two? That’s where the new, more burly Bosch PS11-2A steps in. Little did we know that after Bosch sent us one to review, we would almost declare it a deadbeat tool.

Before we get into our actual tool-testing, let’s cover a few basic design and spec’s, as well as compare the new PS11 to its younger sibling. As you can see below, the new PS11 Right Angle Drill Driver has a massive edge in RPMs and a significant boost in torque.

To kick off the testing, I slapped in a fresh battery and clamped a 2×4 into our beloved Wilton Vise. I thought, what better way to test the PS11 than with a Bosch Daredevil bit? The Bosch tool and Bosch accessory will be so happy together! I picked a 5/8″ Daredevil bit thinking it was a reasonable size bit for the drill driver to handle. Unfortunately, the drill bogged to a rapid stop just after the nose of the bit dug into the wood. Hmmmm. I then swapped out the 5/8″ Daredevil bit for the smallest one in the kit, a 3/8″ Daredevil. It too bogged down almost immediately. I tried swapping out the battery again to no avail.

It was at this point that I started to imagine my phone call with Bosch:

Me: Uh, your PS11 sucks.
Bosch: What are you talking about?!
Me: It won’t even drive a brand new 3/8″ Daredevil bit through a 2×4″!
Bosch: Oh. That sounds bad.
Me: Will you take it back? We can’t write about it. We know you normally make great tools, but this one sucks.

Thankfully, that conversation never happened, and here’s why:

Despite the risk of crossing corporate DNA, I grabbed a set of Irwin spade bits. First up, a 3/8″. The Bosch PS11 absolutely tore through the 2×4″ with it. I was actually a little shocked at how effortlessly it drilled given my experience with the Daredevil bit. I then moved up to 5/8″ and 1″ standard spade bit and the PS11 blasted through with no issues again. I then threw on a 1-1/2″ spade bit. At this point, the PS11 understandably started to struggle. It made it about half way through the 2×4″, but the handle of the drill started to get uncomfortably hot. I might have been able to get all the way through, but decided to throw in the towel.

So Are Daredevil Bits Bad?
My emphatic answer to that is no, they’re actually great drill bits. However, as I learned here, you really need to use them with a tool that has some pretty serious torque. If you don’t believe me, check out a Bosch Daredevil bit spanking an Irwin spade bit in this drill-off we filmed at a Bosch media event:

We learned a couple things during the course of this review:
1) Don’t use Bosch Daredevil bits with the 12v Max 3/8″ Articulating drill driver and
2) If you’re driving most conventional screws or drilling holes under 1″ or so with regular bits or standard spade bits, the PS11 is a great tool for close-quarter hand to wood combat. The solidly engineered chuck brings welcome versatility to Bosch’s previous PS10 model.

The PS11-2A also forgoes the clutch settings of the previous generation. And while the PS10 had what could still be described as a paddle switch, the PS11 steps that up substantially with a longer paddle switch that we found quite comfortable. With the greater torque and rpm spec’s comes a bit more bulk. The PS11 is longer than the PS10 and has a larger head due to the chuck assembly, and it’s also a touch heavier. While the PS11 loses some of the compactness of the PS10, we think it’s a reasonable trade-off for performance and chuck versatility. All in all, the PS11 is still a very compact tool that can nose its way into some pretty cramped quarters. We found the fuel gauge light useful but not as clear as some other fuel gauges on the market. The integrated LED on the new model is also a very welcome addition for a tool that’s often tucked into areas with minimal available light. Of course, the articulating head of both tools make getting into awkward spots more like parallel parking a Mini Cooper than a stretched-out limo.

from our sponsor Tyler Tool for around $139 for the kit, which includes the case, charger and two 12v Max Lithium Ion batteries. Tyler also has the tool only version for around $100.