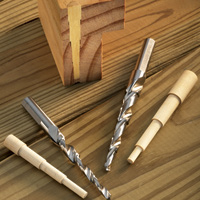 I’m lucky. There’s a Rockler store just 1.8 miles away. Of course I’m also lucky to live by the beach, be only fifteen minutes from work, and live in beautiful southern California. I lucked out again when I started working with Marc and he offered to send me tools and construction materials to evaluate. Some of these came in handy when I had a small mishap during an L.A. Kings game a couple of weeks ago.

The Kings were the number 8 seed and they had no chance against the Vancouver Canucks. So in game one the Kings were leading 2-1 in the closing minutes and the Canucks were staging their last big push to even the game up. They had pulled their goalie and were firing shots on goal when Dustin Brown hit a shot off the side boards and into the empty net. My beautiful, smart, and understanding wife and I were having dinner at the time (yes, it’s legal to have a game on during dinner as long as there is no sound on). When the puck went into the net I of course had to stand up and voice my admiration for what had just transpired. However in my overzealousness and in blatant disregard for the furniture given to us by my loving mother-in-law, I inadvertently knocked over my chair and broke the miter joint at the armrest. Here’s where Rockler scores again.

Rockler carries a brand called Miller dowels. They manufacture and sell packages of dowels made out of different types of wood and also sell a kit that includes what they call the TruFit Drill Bit along with the dowels. The drill bit is a stepped type bit that mirrors the shape of the dowels. In the 1X kit the dowels are 2 ¾” in length and the cap diameter is 7/16.” With it you can join wood up to 1-1/8” thick. 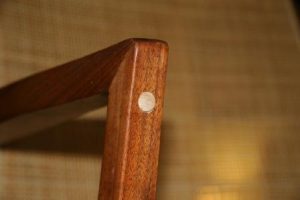 So I get out my Kobalt cordless drill, my bottle of Gorilla glue, and if Marc had sent me a dustbuster I would have mentioned that here as well. It’s so easy my wife could do it. However, she professes to be tired of doing everything so I guess I’ll take care of this myself. Once you drill the hole the right depth you put a little glue on the dowel and hammer it in until it’s flush with the surface. If the angle of your pre drill is a little off of perpendicular then sand off the dowel so it’s flush, and re-finish. With my keen eye I was able to drill true and straight so all I have to do now is put a little color on it and it will be good as new.

I have some other furniture pieces that show some signs of loose joints so I might actually get proactive and fix ‘em before they come apart. LOL just kidding honey, I’ll get to that right after the playoffs. This is great – hockey, basketball… this could take months!

One last tip: putting the chair on top of the dining room table to work on it so you don’t have to bend over is apparently a no-no. She is obviously of the opinion that maintaining the finish on the table is more important than causing strain on my back slaving over the chair at a less than convenient height…

By the way, the luckiest thing I ever did was to marry my beautiful wife…. How’s that for a finish honey?

You can find Miller Dowels, Kits and Bits from our sponsor Rockler from $12 for a single bit to $48 for a full kit of dowels, bits and more.