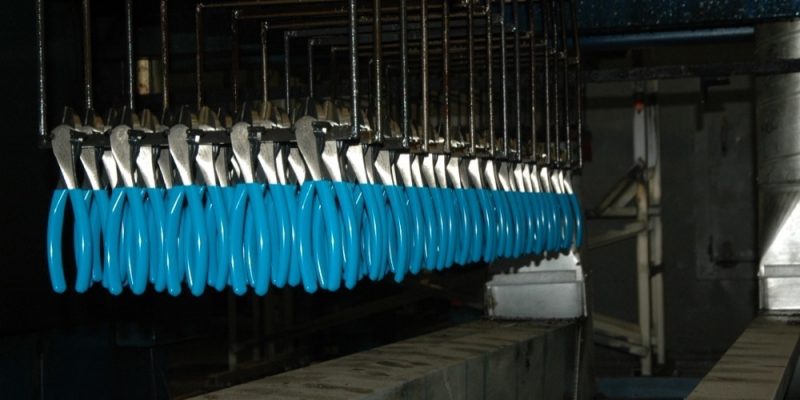 I recently visited the headquarters of Channellock, Inc. in Meadville, Pennsylvania for my second tour of their production facilities. The family-owned, family-run company has proudly made pliers in the USA since 1886 and from the looks of their bustling production floors, they are ready for another 128 years of making tools for the worldwide market. Channellock, Inc. is most famous for its trademark tongue and groove pliers, almost universally called “Channellocks” by generations of tradesmen, but they manufacture about 120 varieties of pliers here. The company also sells wrenches, screwdrivers and other hand tools, but only the pliers are produced domestically. This video and the photo sequence below follows along the process of how pliers are made.

Starting with a glowing billet of North American-sourced 1080 steel, both pliers halves are forged simultaneously between top and bottom dies in a massive drop forge machine. Nine tons of hammering force shakes the floor vigorously even though the machine has a suspension system and sits on its own foundation set below the building’s floor to isolate the vibration.

The die faces have a few different shapes sunk in to accommodate the steps needed to go from a cylindrical bar, to a flattened bar, to a bent bar, to the final parts. You can see that the forge operator moves it into different positions on the die as it is hammered.

The forged pliers halves are punched loose from the excess steel surrounding them with a trim press, then run by conveyor belts into separate bins to cool.

Punch presses and various milling processes then prepare the forged pliers components to be joined into a single precision tool.

Twin machining operations cut the teeth into the face of pliers halves. More detail for this step is seen in the video. 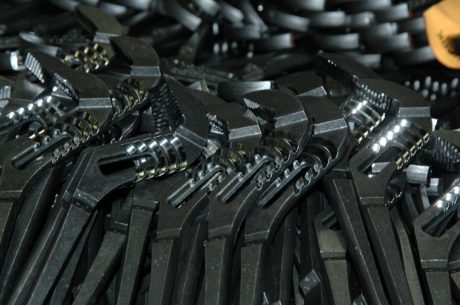 Along with the teeth, the grooves of these tongue and groove pliers are also cut in with a machining operation since their angled shape can’t be formed by forging. These special undercut grooves are the key to making the pliers’ halves hold themselves together tightly without applying outward force on the tool’s rivet while the pliers are being used.

This robotic station was undergoing maintenance work during my visit so I didn’t see it in action this time. But when it is in operation, the robot arm picks up a part and runs it across two different grinders to form both sides of a tool’s cutting edge before setting it down on a conveyor belt that moves the part on down the line.

The cutting edges and tips of the pliers’s teeth are further hardened with a laser heat treatment that I was not allowed to photo-document.

Once the mating joint surfaces, teeth, and cutting edges of the pliers are in proper shape and the parts have all been heat treated, the pliers halves are then joined with permanent riveted connections.

Finish grinding with giant belt grinders removes forging ridges and puts a smooth finish on the parts of a tool a user will handle. Here pliers handles are ground above where the tool’s plastic grip will cover. 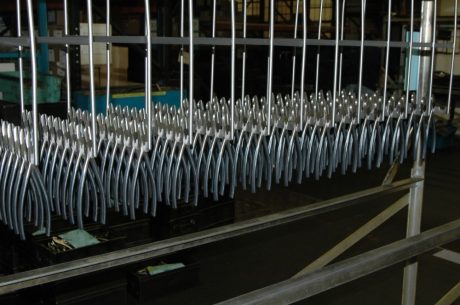 Once completed and inspected, the pliers are ready for plastic handles. The thicker Code Blue plastic handles are slid onto tools individually but the traditional PVC grips are dipped.

Then after a final inspection and packaging, the pliers are off to the stores and into your tool boxes and kitchen drawers.