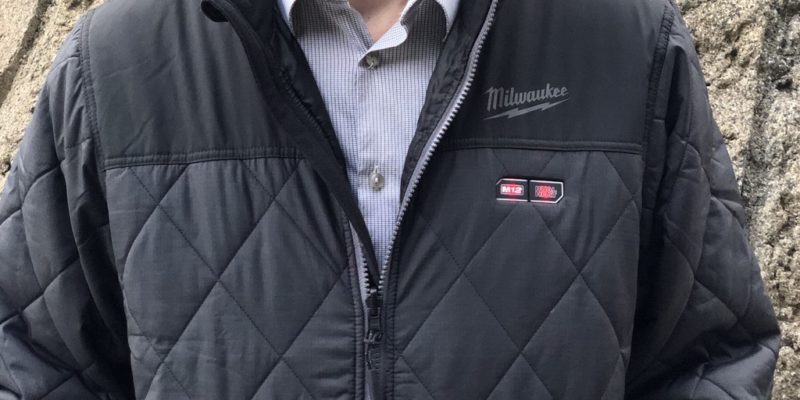 Remember when we had to wear clothing that DID NOT have batteries?! Those were such dark, cold, depressing days. Then along came Milwaukee with their first heated jacket, and a second updated heated jacket, even a heated hoodie, and the next thing you know their gloves are heated too. Back when they first came out you could have any color you wanted (as long as it was red), and the style selection was limited. Now there are a multitude of Milwaukee heated jacket options (and other brands are making heated gear too). Join us as we review one of the latest additions to the Milwaukee heated jacket lineup, the M12 Axis.

I know what you’re thinking. . . “don’t you live in San Diego where the year ’round temperature is a constant 70, plus or minus two degrees?” It’s true. While some of the prior heated gear goodies were tested in chilly-willy Pennsylvania winters, I took on this particular Milwaukee heated jacket review in part because the Axis jacket is a bit lighter duty than much of the other heated gear. But fear not, I field tested the Milwaukee Axis jacket in some of the chillier temps in San Diego (don’t tell anyone, but it dips below 70 here in the winter), but I also trekked it up into the snowy mountains for more rigorous testing. It was even tested in conditions where this odd, fluffy but frozen white stuff was descending from the sky. Also, given how thin-skinned San Diegans are, it makes us highly sensitive to fluctuating temperatures.

One thing you might immediately notice with the Milwaukee Axis heated jacket is it looks downright stylish. Reinforced high wear zones around the shoulders, inner and lower sleeves, and around your highly-sculpted oblique muscles help protect against rips, cuts and other unwanted ventilation. The jacket is stylish enough that I routinely wear it out in public, and I have yet to have someone question why I am wearing jobsite gear. The mix of quilted and non-quilted ripstop polyester helps protect you from style critiques on the jobsite or at your next outdoor social event.

I like to be light and nimble, and the Axis is perfect for that. The polyester insulation makes for a very thin, lightweight, and comfortable feel. Even with a few layers underneath, you won’t be wobbling around looking like the Stay Puft Marshmallow Man. Speaking of layers, this Milwaukee heated jacket is even thin enough that you could layer a heavier winter jacket over the top of it. If you like staying agile, but also being warm, the Axis is a strong contender.

Aside from wearing the jacket regularly when running around San Diego in the evenings, I used it around the home jobsite quite a bit too. My schedule often has me cramming my honey-do’s into the evening hours after our beloved San Diego sun has gone down. On one cold evening, I was working on installing the metal chute and hardware on a new in-column mailbox we installed (stay tuned for an article on that). Although the Axis does a respectable job of blocking the wind, I was getting chilled. I fired up the Milwaukee heated jacket to its maximum setting (it has three heat levels), and I could feel the heat in less than a minute. Within a few minutes I went from chilled to very comfortable, but still had plenty of range of motion while working with my hands.

Additional field testing included some gruelling supervisory work. This involved what most supervising involves – almost no physical movement whatsoever. Despite breezy, chilly and even somewhat wet conditions, the Axis jacket kept me comfortable. Sure, this Milwaukee heated jacket could handle the worst that San Diego could throw at it, but I wanted to push the envelope a bit more. It was time to hit the mountains!

Phase two involved leaving the comfort of San Diego in the rear view mirror, and gaining some altitude. Believe it or not, if you drive just a couple hours northeast of San Diego, you can actually find yourself in the aforementioned mysterious fluffy white stuff – also known as snow. I made sure my Axis Milwaukee Heated Jacket accompanied me in the car on our way to Arendelle, (after Elsa finally lost it and made everything frozen). Yes. Yes I did just drop a Disney Frozen reference in here. This is what having daughters can do to a man.

About 90% of the way up the mountain, the white fluffy stuff started coming down with gusto. I made the decision to pull over and do a task that just about everyone encountering snow loves – it was time to put on chains. I slipped on the Milwaukee Axis heated jacket, and bid farewell to my wife and daughters. They all gave me a look of, “we hope you make it back in one piece” combined with “luckily daddy has to test that jacket, otherwise it could be one of us trying to get the chains on.”

With the heat setting on max (I’m a San Diegan, and it was snowing, this was no time to experiment with low or medium), I ventured into what turned out to be sleet. Aside from my nose freezing, the Milwaukee heated jacket kept me relatively comfortable. FYI, Milwaukee has yet to release their M12 Nose Heater, otherwise I would have been wearing that too. Despite rolling around on a mixture of snow, slush and dirt – a couple quick brushes from my gloves and the Axis jacket looked like new. Should you encounter more extreme dirtiness, the Axis is washer/dryer safe. Just use the gentle cycle, warm water, low heat in the dryer, and don’t forget to remove the battery pack (which also doubles as a VERY handy usb charger in a pinch).

In addition to installing tire chains, the Axis jacket also accompanied me during some extreme snowman-making, and even up the slopes for some skiing. I powered up the heat during the chilly chairlift rides and then powered down for the adrenaline-filled, sweat-inducing, high-speed runs bombing down the bunny slope. The Milwaukee M12 Axis Heated jacket did a great job of keeping even a thin-skinned San Diegan toasty.

Zone Defense – Chest and Back, Shoulders

I think Milwaukee assumed many of us have ample insulation around those chiseled obliques I mentioned earlier. For that reason, they’re not wasting the M12 battery on trying to heat your belly button. Instead, the main heating zone is around your chest and upper back. A supplemental zone is at the front and back of the shoulders. These seem like pretty logical areas to heat, and having them broken down into zones gives you more customization.

Given that the two buttons are labeled “M12” and “Dual Heat”, it’s not exactly intuitive which one is which. I will save you the trouble of experimenting. The “M12” zone covers the chest and back. The “Dual Heat” zone covers the shoulders. Each zone operates independently. If you have had a particularly rough day “supervising” and feel some shoulder tension, then fire up the shoulders only for some warmth. On the other hand, if someone has frozen your heart, then fire up the chest and back zone and you’re on your way to recovery. 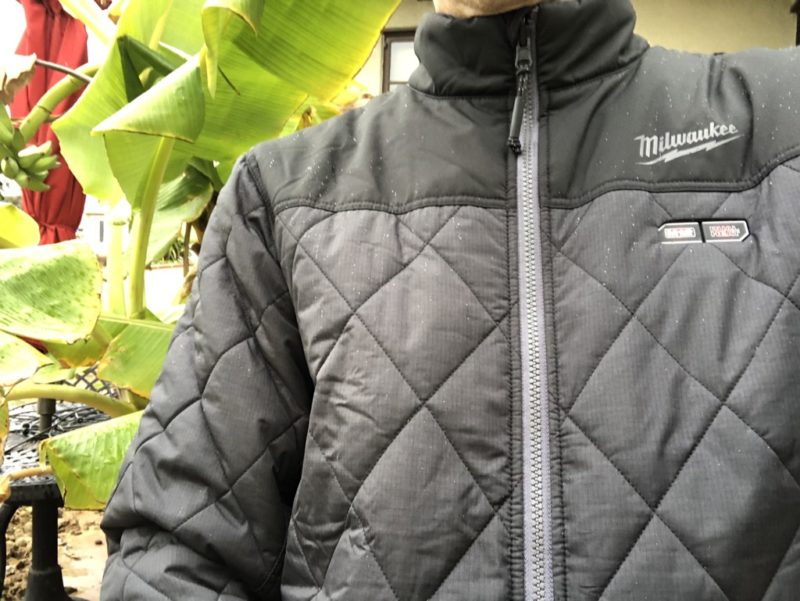 Is It For You – And if So Where Can You Buy It?

Whether you’re a contractor, a homeowner, or just someone that likes to stay warm, the Milwaukee M12 Heated Axis jacket has enough style and performance to cover all the bases. It’s one of the more stylish and contemporary-looking heated jackets we’ve seen on the market. The two outer main pockets are “handy” and warm, however we miss the exterior chest pocket of other Milwaukee jackets (this one is inside, which means you have to partially unzip to get in and out of the chest pocket).

Available in “Jacket Only” configuration – which still includes the M12 Compact Charger and Power Source (the thing your battery goes into), or, as a kit (which include the aforementioned plus a CP2.0 M12 battery). Both versions come in both Male and Female styles, and they make an Axis Vest as well, although we haven’t tried it yet. Prices range from about $99 to $179 with our friends & sponsor over at Ohio Power Tool: