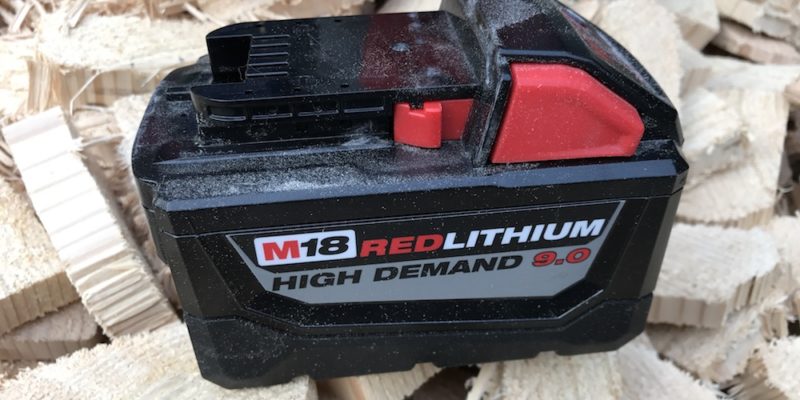 This post is sponsored by The Home Depot. The major tool makers are constantly raising the bar, as they forge ahead in their quest to eliminate all power cords from the job site. What began with cordless drills and reciprocating saws has escalated, and now you’ll find everything from powerful floodlights to sliding compound miter saws to portable table saws, all powered by battery. These bigger tools draw a lot of power, and different brands have come up with various ways to provide it. Milwaukee’s solution is the Milwaukee High Demand battery; the Home Depot sent one along for us to check out for this sponsored post.

The new batteries use Milwaukee’s proprietary RedLink intelligence. This is like a tiny electronic brain that lets the battery communicate with the tool and charger, to optimize tool performance and prevent overloading. According to Milwaukee, the Milwaukee High Demand battery delivers up to 5X more run-time and 35% more power, while running 60% cooler than a standard 18-Volt Lithium-Ion battery.

The engineers at Milwaukee are serious about this Lithium-Ion thing; they have a team dedicated to nothing but battery R&D. Recent advancements have enabled them to extract the maximum power from each cell. They also added an extra row of five cells; according to Milwaukee, this enables the Milwaukee High Demand battery to provide the most work output of any 18V battery.

Why Demand The Milwaukee High Demand?

The engineers at Milwaukee know that tools take a lot of abuse out here in the real world. The Milwaukee High Demand battery is engineered to tolerate a LOT of that abuse, and still retain its “Thank you sir, may I have another?” attitude. One example of this is the water protection barrier near the top of the battery, which routes water away from the electronics and interior of the battery pack.

The battery is also constructed with a temperature control frame, which extends run time and battery life by minimizing heat. It does a pretty good job with the cold, too, allowing the tool to operate at temps down to zero degrees. To prevent battery failure from vibration or drops, the Milwaukee High Demand battery is protected by a rubber overmold, and the interior has a fully-enclosed cell carrier.

User friendliness is important, too. The Milwaukee High Demand batteries have a fuel gauge right on the battery. Just push a button, and you get instant feedback on how much juice remains, on a scale of 1-4. I like this system much better than having the gauge on the tool, because you can test the battery without having to attach it to the tool.

One thing the big tool makers have discovered over the years is that their users get REALLY annoyed when they introduce a totally new battery platform that isn’t compatible with all the tools they already own. The smart ones have come up with ways to make their new, more powerful batteries backwards-compatible with their existing tool lineup. That’s what Milwaukee has done with the Milwaukee High Demand battery; it will work with over 100 of its M18 cordless tools. That should keep the highly-demanding user base content.

In 2014, Marc tested the Milwaukee M18 Sawzall model 2720-20. This was shortly after the saw came out, and we were pretty impressed with its capabilities. As part of the testing, he made consecutive cuts in a 2×4. Using the included 4.0 Ah battery, he was able to make just over 80 bite-sized pieces before the Sawzall had sawed all the Sawzall could saw.

To get an apples-to-apples comparison, I borrowed my son’s 2720-20 Sawzall. I removed his 4.0 Ah battery, and slid in the Milwaukee M18 High Demand 9.0 Ah battery. I fired it up, and started slicing and dicing. Once I got underway, the saw just kept going. And going. And going. My wife was pretty sick of listening to the Sawzall by the time it crapped out. (Note to self: No more weekend testing). Apparently some of the neighbors weren’t overly thrilled by the Milwaukee High Demand battery’s longevity, either. One wandered over and asked me what the hell I was doing. When I told him I was trying to see how long it would take to kill the battery, he offered to help expedite the process…Some people just don’t have that inquisitive DIY spirit.

The Sawzall cut strongly, right up until 2/3 of the way through the last cut, when it suddenly decided it was nap time. The final tally? The Milwaukee High Demand battery powered the Sawzall through 261-2/3 cuts. That’s an impressive improvement, and in the real world, that means you’ll get a lot more work done before you have to take a break to do a battery swap. Not that I’m averse to taking a break – I just want to be the one to decide when that’s gonna happen.

At the end of the marathon, the battery was barely warm to the touch. I threw it on the rapid charger, and about an hour and 20 minutes later it was ready for another round. I somehow doubted the neighbors, or my spouse, would approve of that plan. Frankly, by that time I was in complete agreement. For the last 30 or 40 cuts, I may have been muttering comments along the lines of “Die, dammit!”

There are a lot of other power-hungry tools that can benefit from the added oomph of the Milwaukee High Demand battery. I have used it in the Milwaukee Rocket light tower, my big honking’ Super Hawg drill, my Milwaukee string trimmer, blower and hedge clippers, the Milwaukee M18 miter saw, and the little Milwaukee transfer pump, which will pump a LOT of water on one battery.

Anyone using a circular saw, grinder, hammer drill, or (insert favorite tool here) could really benefit from the increased run time the Milwaukee High Demand battery provides. It does add a bit of weight to the tool, which might be an issue if you’re working overhead all day, but for anything closer to Earth, it’s a great time and aggravation saver.

Time For You To Demand The Milwaukee High Demand Battery?

If you’re invested in the huge lineup of Milwaukee M18 tools, you know you can never have too many batteries. There’s nothing more frustrating than being almost finished with a job, running out of juice, and not having a fresh battery to slap in. With a Milwaukee High Demand battery attached, that’s a whole lot less likely to happen, and a Milwaukee High Demand 9.0 Starter Kit is a good way to upgrade.

Clearly, the star of the kit is the 9.0 Ah battery. The Rapid Charger that comes with it is a great complement to it, though. The Rapid Charger will speed up the charging time for this and any other M18 OR M12 batteries in your collection by up to 40%. And faster is better, right? The charger is backed by a five-year warranty, and Milwaukee guarantees the battery for three years. The whole shebang is also returnable for 90 days, which gives you a chance to see if the battery can live up to your high demands. Grab a kit, and satisfy your tools’ lust for power. 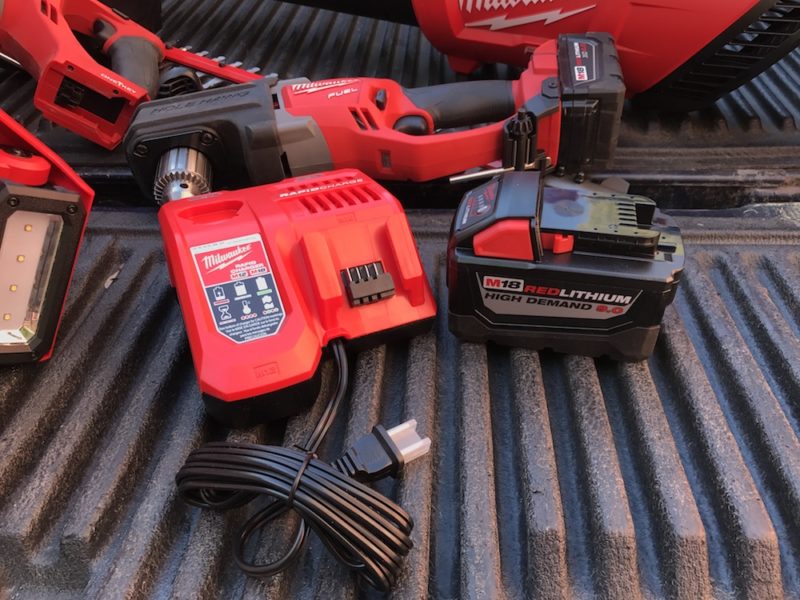 Buy the Milwaukee High Demand M18 Starter Kit for around $199: