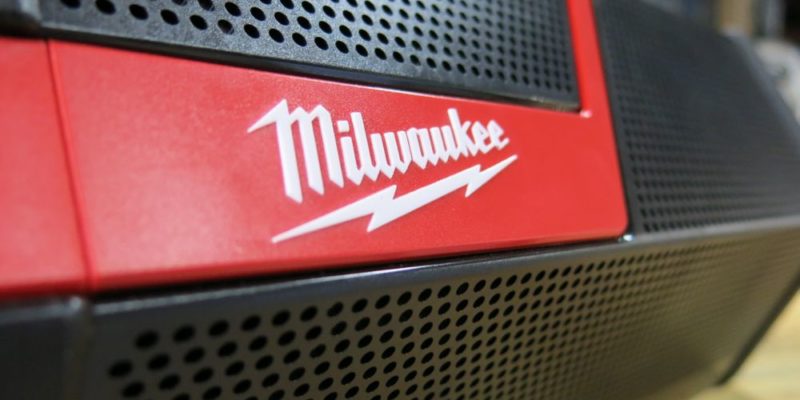 You are on a jobsite (or working on your own home) and have days, weeks, or, as in my case, years of work ahead. One option is to tackle that work in an environment of painful silence interrupted only by the grinds, whirrs and screeches of power tools. Insanity sets in rapidly with this approach. Another option is to rock out to the tunes (or angriest political pundit of your choosing) that keep you entertained and energized. That’s where having a nice-sounding, convenient, and durable sound source like the new Milwaukee M12 M18 Wireless Jobsite Speaker (2891-20) pays off. In this review, we strain neighbor relations and do something completely unthinkable to test out the range, sound quality and usability of this Milwaukee Wireless Jobsite Speaker system.

Milwaukee gave you just about every power option with the exceptions of nuclear fusion, Hydrogren fuel cell, and solar. You can plug the speaker into a wall outlet using the included power adapter, or use an M12 or M18 battery. Keep in mind, it’s not a battery charger, so don’t plan on plugging it in AND charging your batteries. While the power options are great, I think they should have left the M12 option off the speaker.

The M12 input is off to the side of the recessed battery space at the back of the unit. Inserting an M12 battery is easy enough, however removing it is awkward. There’s very little space around the M12 battery to depress the tabs to release the battery. And, if you throw in a high capacity XC M12 battery, it’s even more awkward to get out. The M18 battery access doesn’t suffer those same issues, simply slide the M18 Battery pack of your choice in or out, easy-peasey. I even plugged in a 9.0 AH M18 and it fits, no problem. If you’re plugged into AC power and then insert a battery, you can remove the AC plug and the speaker will even retain power for uninterrupted tunes.

The speaker offers wireless Bluetooth connectivity as well as an aux input if you want to go old school. There’s also a usb port if you want to charge your smartphone (it will power anything under 2.1 amps of DC current. . . if you plug in something beefier it will trip a self-resetting overload protection which will temporarily disable the output). So, don’t plug in your USB hairdryer, OK? The AC power, usb, and aux-in ports are all under a little weather-protected cover that stays in place with a rubber tab. Personally I plan to never use any of them, with the exception of maybe charging my phone. . . but they’re there if needed.

Bluetooth Pairing – Much Easier than Dating

Pairing is about as simple as it gets. I even managed to pull it off on the first try without reading the manual, a source of pride I share with many Home Fixated readers and writers who only read manuals as a last resort. I powered the speaker on, pressed and held the bluetooth button until it started blinking. I then grabbed my phone and opened up the bluetooth settings. Select the Milwaukee M12 M18 Speaker option and boom, your paired and ready to rock!

Milwaukee says this speaker is good for 100 feet of range. Indoors, I had to get a couple rooms away and on another floor before the playback started to get choppy. The house we tested in isn’t huge (about 1800 square feet) so we literally could not exceed the range on the same floor. Indoors, I’d say if you’re far enough to exceed the range of the speaker, you’re probably too far away to actually be listening to it too.

Outdoors, we decided to not only test the range, but also to test our neighbors’ noise-tolerance. After carefully considering Beethoven or another similar option as the music selection that my potentially noise-sensitive neighbors might be less likely to complain about, I settled on a soothing track from Metallica. I put the Milwaukee Wireless Jobsite Speaker in the hands of my trusty assistant, (after providing hearing protection) and cranked up the Metallica. I then backed away, cell phone in-hand and moved across the street and up the block. At right around 110 feet, the audio started to cut in and out. When I inched a few feet closer, then we were rockin’ Metallica and pissing off neighbors again. The range is highly dependent on line of sight vs obstructed. I had the Milwaukee Wireless Jobsite Speaker blasting in the backyard and when I went about 25 to 30 feet away and around the house, the music started to cut in and out.

All of this really only matters if you’re keeping your phone in your pocket and traveling a fair distance from the speaker. If you plug in your phone for a charge, you will not need to be concerned about range at all. Naturally, if you’re on a jobsite where various trades are present and you don’t want your phone to run off with someone new, leaving it plugged in might not be recommended.

After using Metallica for the neighbor relations / outdoor distance test, I decided to do something crazy to test the sound quality. Something that’s probably NEVER been done before on a jobsite speaker. Something inconceivable. Yes, I tested it with mellow, ambient electronic music. A good friend of mine, David Helpling, is a popular composer and ambient electronic artist. When he composes his material, he takes it into sonic ranges that most sound systems and speakers aren’t even capable of replicating. And while I wouldn’t expect the Milwaukee Wireless Jobsite Speaker (or anything short of $20,000 in high-end studio gear) to precisely replicate the highs, mids and lows of David’s music – I thought it would be a great test for clarity and sound quality. After all, if you’re listening for distortion in Metallica’s music, you’ll find it whether the audio is whisper quiet or Spinal Tap, “set it to 11” loud.

The Milwaukee Wireless Jobsite Speaker has a 40 Watt Dual Channel Amplifier coupled with two high definition mid-woofers, two high range tweeters, as well as two passive radiators. I cranked up David Helpling’s and Jon Jenkin’s “Sun Racer” from their album Found, and took a careful listen. The above-mentioned components all combined to produce very crisp sound quality without sounding thin or overly heavy on the bass, even when set at full volume (see/hear the short video below).

Hear that distortion?! Neither do we! A quick tease on our upcoming review of the @milwaukeetool M12/M18 Wireless Jobsite Speaker. We do the unheard of and test it with ambient electronic music (& Metallica too). #milwaukeetools #bluetoothspeaker #electronics #electronicmusic #davidhelpling

Many portable speakers degrade sound quality rapidly at higher volume levels as all the frequencies start to meld into one muddy, bass-heavy, distorted mess. Milwaukee appears to have capped the maximum volume at a point where it’s still plenty loud but also very clear. Unless you’re planning to play to a crowd numbered in the thousands, you should have plenty of juice to rock your jobsite audience (and maybe a annoy a couple neighbors). The Milwaukee bluetooth speaker rocked gritty Metallica just as adeptly as it blasted glistening highs, endlessly-decaying reverb and ultra-low lows in David’s ambient tracks. By the way, the speaker will alert you when you’ve hit the max volume setting with a brief beep (same thing goes at minimum volume, not that you’ll ever use that setting)!

I wish Milwaukee had taken a cue from its M18 Jobsite Light which offers a couple pre-molded attachment points. While you can set the Milwaukee Wireless Jobsite Speaker on the floor, workbench, etc. it would have been great to have the option to hang from a nail or screw to get it up on a wall and out of the way. For a jobsite speaker, it’s not small. . . so don’t expect a palm-sized device here (it’s about 14″ wide and about 7″ tall). A handle in one of the end caps makes it easy to tote though. Reinforced caps and a metal grill serve to protect your precious noise-maker from injury as it’s inevitably kicked around. The speaker is IP54 water and dust resistant to help it withstand the abuse it will no doubt take in your shop, yard or jobsite. If you’re old skool rockin’ a flip phone and listen to AM talk radio, it’s either time to join the current century or pass on this speaker. On the other hand, if you own a smartphone and you appreciate crisp, clear tunes while you’re working, no matter what music genre, the Milwaukee Wireless Jobsite Speaker will rock your socks off.

You can find the Milwaukee M12 M18 Wireless Jobsite Speaker (2891-20) from our sponsor Ohio Power Tool for around $149 (batteries are sold separately).