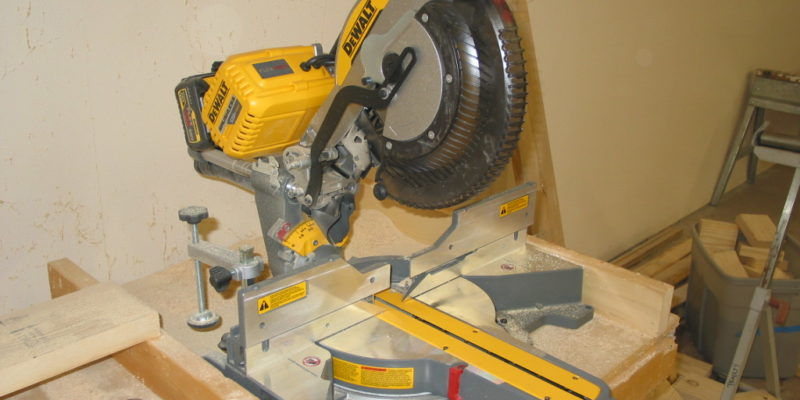 I had to flex my pecs to pick this mother up, too. And you’ll have to read carefully if you want to find much more criticism in this review. Honestly, the grunting and groaning possibly has more to do with advancing age and declining muscle mass than the actual weight of the saw. Still, at close to 56 pounds (tool only), the DeWalt FlexVolt Miter Saw is a hefty tool requiring some back muscles, and a good attitude, to move around. Just taking the two 9 amp/hour batteries off may save you from expensive surgery. It’s worth mentioning the corded version of the same saw is 44 lbs., just for comparison. On the other hand, just think how heavy it would be to carry around a small power generating plant. 18 amp hours is some fairly serious juice. Now that the girly-man whining is out of the way, let’s get to the manly-man masculine-type fawning etc.

Introduced in 2016, DeWalt’s FlexVolt system offers batteries which can operate at either 20 or 60 volts. So if you already own DeWalt 20V Max tools, just plug in one of these FlexVolt batteries and the battery “knows” to operate at the lower voltage (20V) and you get mega-run-time. Plug it into a 60V tool, and you’re good to go. The DeWalt FlexVolt Miter Saw uses two 60V batteries in series to produce 120V. So, if you’ve already invested in the 20V Max system, no need to fall into a deep depression. These batteries will work on your tools. The kit I received came with two 9 AH batteries, which provided long runs between charges. For reference, the DeWalt website claims “Up to 289 cuts per charge in 3-1/4″ base (molding).” Which seems to mean nominal 1×4 stock, so expect proportionately less if framing with nominal 2×4 or 2×6 material.

Here’s the kicker on the DeWalt FlexVolt Miter Saw though: It can swing both ways. I’m talking AC/DC big time. Included in the kit is an AC power adapter which simply slides into the slots where the batteries go. Essentially an inverter, it converts the utility power to DC power and runs the saw. So if your work site has power, simply plug and play. No power? No problem. Slide in the two 60V batteries and have at it.

The DeWalt FlexVolt miter saw spent a week on a jobsite of a local remodel for light industry. I didn’t count the number of cuts from each charge, but the walls were being fabricated of 2×6 material, and there were lots of them. This is an 11,000 sq. foot structure which was being divided up into several new rooms. A crew of 2 to 3 was framing walls near steady all day for three days, and the batteries died only twice. Of course when I say “all day” what I mean is probably about 20 hours of active framing. This was a remodel, so every length had to be measured individually. New construction goes quicker, with most cuts being equal length. I think it’s fair to say two guys not in a big hurry could frame the better part of a workday on a full charge of two 9.0 AH batteries.

Here are all the vital specs from DeWalt:

A full recharge of both batteries took about 1.5 hours. Because we had utility power available on this jobsite, we just ran the saw with the AC adapter provided with the kit while the batteries recharged. The saw seemed to run equally well on batteries or plugged in. Some users did comment they felt it was a bit stronger pulling power from the wall, but nobody felt the tool was under-powered running on batteries. The batteries have a fuel level system comprised of 3 LEDs, and they flash when the batteries are running low. The “heads-up” is a nice touch. If you’re working where no power is available you know when the green lights start flashing it’s about time to crack a beer (assuming you timed the battery depletion with the END of your workday).

The DeWalt FlexVolt Miter Saw: Does it Cut the Yellow Mustard?

Pretty much everything you expect from DeWalt in a sliding compound miter saw is here, including the newer saw blade alignment system, the “Cutline Blade Positioning System”. Unlike laser guides, which require calibration (and are notoriously failure prone) this LED setup simply shines a light from either side of the blade and gives you the exact blade position on the material every time. Mo’ simpler; mo’ better. Everyone on the job using the saw commented favorably on the ease of this system, especially compared to laser guides. And overall, the DeWalt FlexVolt Miter Saw lived up to DeWalt’s reputation for high-quality tools. It performed well in every respect.

All settings were spot-on, straight out of the box. Anyone who routinely uses a full-sized compound miter saw would likely be very happy with the performance of the DeWalt FlexVolt sliding miter saw. Despite the notoriously power-hungry nature of these beasts, I’d say the guys using the saw I was supplied with by DeWalt were all a bit surprised at the staying power of the battery system (you can’t just say “battery” anymore).

Although the DeWalt website shows workers cutting bigger lumber – 4×4’s and 2 x 12’s, etc. – I would say this tool is being aimed more at finish fitters than framers, as the only blades specifically touted for this saw available on the DeWalt website are a 78-tooth, ultra-fine finish blade and a 60-tooth blade, also apparently a finish blade. That may change, but that’s all I could find when I wrote this (here’s a link) (February of 2017).

The kerf on these more efficient blades is only .085” whereas a typical framing blade is closer to .125”. The blades are engineered to provide extended run time over standard corded tool blades, weighing less and taking a smaller bite from the material. My suspicious mind would want to know if that thinner blade would withstand heavy cutting all day, day in and day out. You can run a beefier blade, but run times will be reduced substantially, though I could find no claims on the website for specifics. My Brother Phil’s article on the DeWalt FlexVolt Table Saw references the issue as follows: “DeWalt claims the efficient FlexVolt blades will let you get roughly twice as many cuts per battery charge as a standard blade.” Well, he’s older than me and a little touchy, so we’ll just say he’s correct.

FlexVolt and Cordless – A Positive Trend

I’ve tripped (no, this is not some awkward drug confession) on extension cords before, and seen others do the same. So I welcome the shift towards a near cord-free work site. Mostly now it’s battery chargers and compressors needing the umbilicals. Oh yeah, and table saws. But as Phil’s recent review of the DeWalt FlexVolt Table Saw shows, that’s changing too. So now we have battery powered tools taking on the tasks such as air compression (review coming soon) and ripping sheet goods as well. Cords are disappearing from the floor, but battery chargers seem to be breeding like mice under a drafty Maine cabin.

Do You Need This Saw?

Definitely maybe. If portability is important to you, for whatever the reason, then the DeWalt FlexVolt Miter Saw could be right up your alley. For instance, on a big jobsite with limited power, it may save a lot of running back and forth, as you could set up wherever you can find room and not be dependent on finding a power outlet. I found it super handy to throw in the back of my pickup for cutting kindling to length without having to roll out the extension cord. Or, you could bring it into the Grand Canyon in a backpack and build yourself a nice little shack when the ranger isn’t looking. Use your imagination, people. You definitely need this tool – if you can afford it, of course. The FLEXVOLT 120-Volt MAX Lithium-Ion Cordless 12 in. Double Bevel Sliding Brushless Miter Saw Kit currently retails for just under $800.