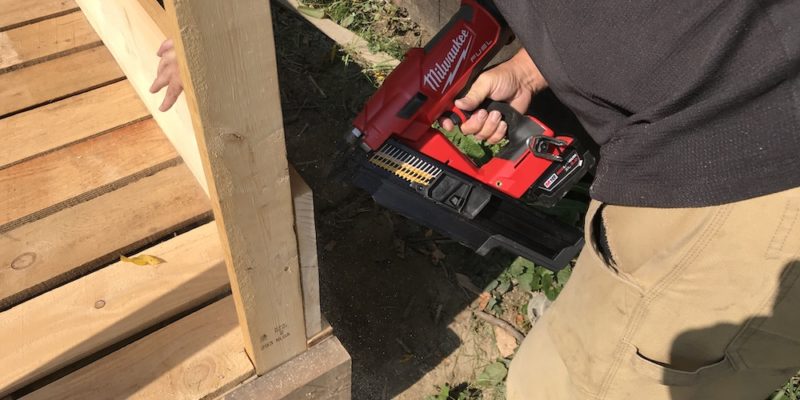 Although the brand names will vary, there are certain tools you’ll find on every framing carpentry crew: Framing hammers. Circular saws. Chop saws. Rafter squares. And framing nailers. While that last one definitely makes the job easier, framing nailers also come with some strings attached. Or more precisely, hoses. And noisy, heavy compressors. That was the price you paid for a major increase in speed. Milwaukee Tool says their new Milwaukee M18 FUEL Framing Nailer lets you keep the speed, but ditch the hose and compressor; we’ll take a look, load it up, and see if there’s anywhere they came up short.

While there are other cordless framing nailers on the market, many have their drawbacks. Some require pricey, smelly gas cartridges. Others have a lag of a second or so between pulling the trigger and firing the nail. Milwaukee engineered the Milwaukee M18 FUEL Framing Nailer to operate using a sealed compressed nitrogen system, that puts out enough power to drive full round-head nails through engineered lumber – while launching up to three nails per second. Here’s a list of some of the nailer’s features and specs, followed by a promo video from Milwaukee:

Getting A Handle On The Milwaukee M18 FUEL Framing Nailer

When the Milwaukee M18 FUEL Framing Nailer slides out of the box, its quality is immediately apparent. The nailer body is solid and robust, and the tool has a solid heft to it. A ten-pound heft, to be exact.

A layer of rubber overmold covers the handle, to make the tool more comfortable and less slippery and vibration-prone. The overmold extends to the rear of the nailer and encircles it, helping to reduce accidental dings and scuff marks on any finished surfaces the nailer encounters.

Situated at the base of the handle, the controls are easy to locate and use. Pressing the power button for about a second and a half powers the Milwaukee M18 FUEL framing nailer up and shuts it down. The nailer can operate in single sequential actuation mode, or in contact (bump) mode, and switching from one to the other is fast and easy. Simply pressing the MODE button for about a second lets you toggle between the two modes.

The Milwaukee M18 FUEL framing nailer can shoot full round-head nails ranging in length from 2 – 3-1/2”. Getting them loaded and locked is simple: Drop in a strip of nails, depress the button on the pusher strip, slide the pusher behind the strip of nails, and release it.

To regulate how deep those nails go, fire a test nail or two into some scrap lumber similar to what you’ll be working with. To get more or less oomph, just twist the depth adjustment dial on the front of the nailer. Tiny arrows will show you the way.

When it’s time to take a break from launching those nails, there are a couple of alternatives to setting the nailer down in the mud. Option One is a very beefy rafter hook, which offers a convenient way to keep the tool off the ground, or to keep it handy between uses.

There’s also a sturdy belt hook, but given the 10-lb. weight of the tool, the belt hook is recommended for exhibitionists only. Or framers with suspenders and a super-sturdy belt.

The Milwaukee M18 FUEL Framing Nailer Plays In The Woods

For its maiden voyage, I brought the Milwaukee M18 FUEL Framing Nailer along on a visit to my brother Steve’s place in rural New York. He and his wife recently retired, and had an epiphany along the lines of “Hey, let’s buy a huge piece of property that needs work, and raise sheep! It will be so relaxing!”

Actually, it is a pretty spot, with almost 80 acres, about 2/3 of which is wooded. Much of the rest is pasture, with wooly sheep grazing (more or less) contentedly. One cool feature is a rustic cabin toward the back of the property. There’s no electricity or plumbing, but there is a wood stove and a covered front porch, and it’s a nice tranquil spot to hang out.

Their supply of firewood had been stacked haphazardly off to the side of the cabin, and they wanted to build a firewood shed to protect it. The absence of electricity made this the perfect testing ground for the Milwaukee M18 FUEL framing nailer, along with his Milwaukee M18 sliding compound miter saw.

Since this was an outdoor project, I got a box of galvanized nails to feed the nailer. The nailer will accept nails from 20° – 22°, and helpfully, our local home center carries a pretty good variety of 21° nails.

We got to work, and used the Milwaukee M18 FUEL framing nailer to drive every nail that went into the woodshed. The nailer was easy and intuitive to load and use, and ran through half a box of galvanized nails with no jams. We also got through the entire project with no proud nails, every nail was driven sub-flush. A dry-fire lockout kicks in with about four nails remaining in the magazine.

The combination of Milwaukee’s brushless motor and its REDLINK intelligence makes for a very efficient nailing machine. To power the nailer, we used a 5.0 Ah battery, and at the end of the project there were still two bars remaining on the battery’s indicator.

Out In The Boonies, Part Deux

After once again bailing out my brother, it was payback time. We have an old farmhouse in PA that we’ve been slowly rehabbing (it’s a familial genetic defect), and one project on the hit list was to change out the cheap, squatty windows in the living and dining rooms for some new wood double-hung units. Steve happily offered to come and join in the fun, along with another brother, who is no longer taking my calls.

Since we were replacing two windows with three in each room, I needed to re-frame the openings, with two intermediate supports instead of one. The Milwaukee M18 FUEL framing nailer made short work of toenailing the doubled-up 2×4 supports into place.

While I had the nailer handy, I also used it to fur out an enlarged doorway opening, to get it ready for trim. Not having to drag an air hose over our new hardwood floors, and listen to the annoying roar of the compressor, made the task much more pleasant.

Thank You Sir, May I Have Another?

Milwaukee’s extended magazine was very easy to install, and took less than five minutes. Simply remove the three retaining bolts – two on the nose, one midway along the magazine body. The short mag drops off, and the extended mag can be slid into place.

For most framers, time is money, and having to reload frequently is frustrating. If they’d just made the original magazine about 2” longer, we’d have been able to fit two full strips of nails. Instead, to get the added capacity, users have to fork over more money, which doesn’t usually make for happy customers. Additionally, the extended capacity magazine is fairly cumbersome, and won’t fit into the contractor bag that comes with the nailer when it’s attached.

Ideally, Milwaukee would re-engineer the standard mag and make it long enough to hold two strips of nails. Alternatively, we’d like to see Milwaukee offer the nailer in two versions: One with the standard mag, and one with the extended version. I bet I know which one would sell more. Meanwhile, if you want to avoid the mantra of “Thank you sir, may I have another?”, the extended capacity magazine is HIGHLY recommended.

Ready To Pull The Trigger On The Milwaukee M18 FUEL Framing Nailer?

As we wrap this up, I just want to say that the Milwaukee M18 FUEL framing nailer is a beast, and I like it. A lot. It’s built like a tank, operates smoothly and flawlessly, and with the exception of the aforementioned short magazine, very well designed and laid out.

Even when firing full-size nails, there is almost no recoil, and there is absolutely zero ramp-up time, even in full-speed bump mode firing. Battery life is excellent, and adjustments are fast and easy. Like most battery-powered nailers, the Milwaukee M18 FUEL framing nailer is on the heavy side. That’s a price I’ll happily pay to be able to skip schlepping along the air hose and compressor – if there’s even a place to plug it in.

The Milwaukee M18 FUEL framing nailer is available as a bare tool, or in a kit that includes the nailer, one M18™ REDLITHIUM™ XC5.0 battery pack, an M18™ & M12™ Multi-Voltage Charger, a rafter hook, non-marring tip, and a contractor bag. Milwaukee backs the nailer with a five-year limited warranty, and the battery for three years. Pick one up, and see how sweet a trial separation from your compressor and air hose can be.