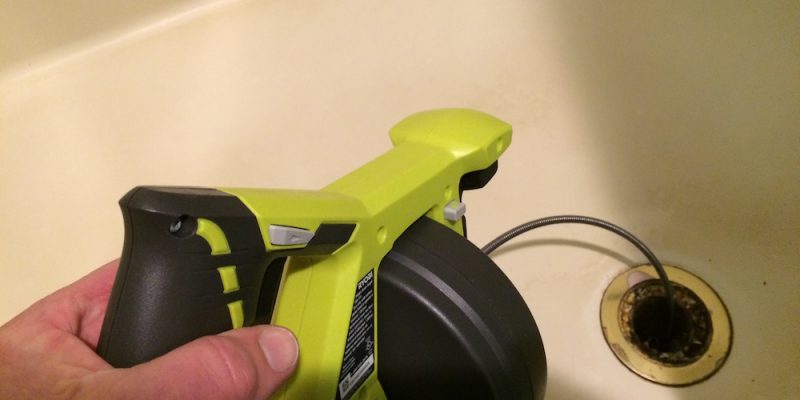 In the Tool Review universe, we get to take an up-close look at some pretty sweet, interesting tools. Laser tape measures, oscillating multi tools, cordless sliding miter saws, and monster cordless drills are just a few of the cutting edge products we’ve reviewed recently. One of the products that snaked its way into HomeFixated Global HQ a short while ago is definitely interesting, but I doubt anyone would call it sweet – especially after it’s been used a few times. Join us as we take the Ryobi Drain Auger for a test spin.

Powered by any Ryobi 18-Volt ONE+ battery, the Ryobi drain auger can be used in pipes from ¾” – 2” wide. Designed for use in sinks, toilets, and bathtubs, it has a variable speed trigger, and a 25-foot cable that’s reinforced to prevent kinking.

Weighing in at around six pounds, the Ryobi drain auger has a cable clamp to hold the cable in place while tackling tough clogs. To prevent user fatigue, it also has a powered forward and reverse feeding mechanism, and an auto-feed lock that advances or retracts the cable without having to squeeze the pommel. A rear drain port prevents water build up in the drum.

Naturally, when the Ryobi drain auger arrived, all of our plumbing was working perfectly. Just like there’s never a cop around when some loser schmuck is weaving in and out of traffic at 90 MPH, there never seems to be a hairball clogging your drain when you need one. Even after trimming my beard and nose hair several times, the drain remained clog-free. I finally decided to perform a simulated drain cleanout, to see how the Ryobi drain auger would perform.

I pried the grate out of our shower drain, inserted the end of the cable several inches into the drain, and fired the auger up. To feed or retract the cable, you squeeze the trigger with one hand, and squeeze the pommel at the front of the Ryobi drain auger with the other. This works, but it’s pretty slow, which is intentional; you don’t want to try blasting through the clog at 90 MPH like that psycho driver. To speed things up, though, it helps to feed the cable out by hand until you come to a bend or obstruction, and then switch to the powered feed.

I pulled some cable out and fed it into the drain until it hit the trap. I then switched to the powered feed, and fed several feet of it through the shower’s drain pipe. The motor on the Ryobi drain auger is very torquey, and seems to have plenty of power for its size. It fed the cable through the drain very smoothly and steadily. The variable speed trigger provides very good control over the auger’s speed, and when you release it, the drum stops spinning immediately.

Sadly, no renegade obstacles were lurking in there. If there had been, the Ryobi drain auger has a cable lock, which, as you might suspect, allows the user to lock the cable, so it can be pushed and pulled through an obstacle to break it up.

To conclude my trial run, I retracted the cable, using a combination of powered feed and pulling the cable. Again, pulling the cable out manually is quite a bit faster. I was very excited to see that, somewhere in the depths of our plumbing, the Ryobi drain auger had managed to latch onto a small hairball. Woohoo!

When the cable exits the drain, make sure it isn’t spinning. If it is, hair and any other nastiness that was lurking in the drain will get splattered all over the place. It could also possibly cause the cable to kink or smack you in the face, neither of which is a desirable outcome.

Once your drain is clear, it’s a good idea to clean the drum and cable before you put the Ryobi drain auger away. Depending on what sort of pipe you’re cleaning, the cable has the potential to be covered with some pretty nasty, smelly, bacteria-laden stuff. Speaking of which, if you plan to do any snaking through your toilet, make sure to suit up with rubber gloves and eye protection first.

The drum has a little rubber plug in the back of it. Just pop the plug out, and tip the unit over so any liquid inside spills into the toilet or somewhere appropriate.

Next, take a rag and some warm, soapy water. Slowly pull the cable out of the Ryobi drain auger, cleaning the cable as it exits. When it’s clean, take a dry towel (preferably one you’re not all that fond of), and dry the cable as you push it back into the drum. Once it’s back in, drain the drum again, in case any water got in. and that’s it – all ready for the next hair-pulling adventure!

Ready To Take The Plunge? 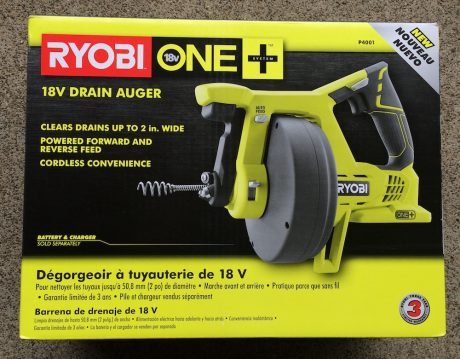 A better idea might be to do a search for “Ryobi combo” on Home Depot. There are several available, and it can be a great deal. For $79, for example, you can get a combo that includes a drill driver, a cordless saw, and a battery and charger. After your drain is cleared, you can celebrate by drilling some holes and cutting something up! The Ryobi drain auger is backed by a 90-day exchange policy and a three-year warranty. It is available exclusively at the Home Depot for around $70, where it has received very good reviews. 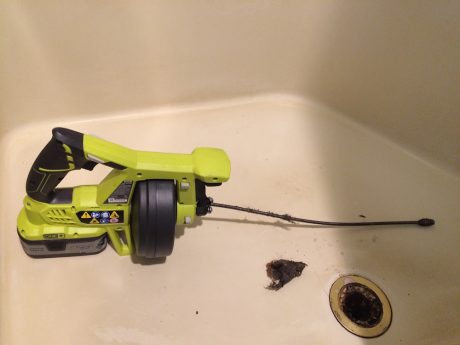