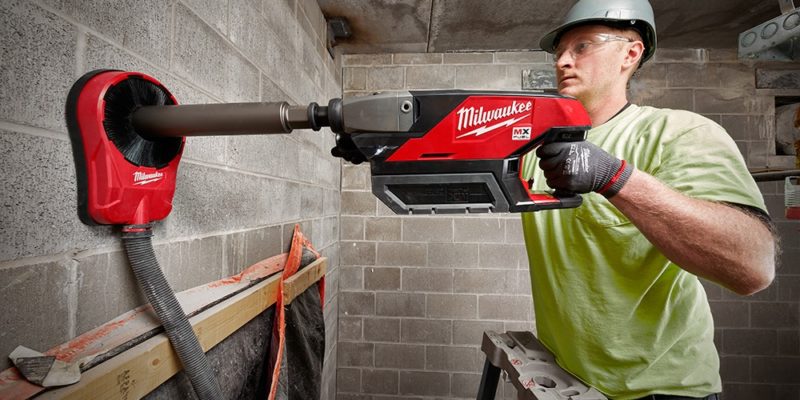 These past few months have certainly been strange times for a lot of people. The transition to being around the house more often has been a double-edged sword, with increased family time sometimes competing with a sudden need to complete a backlog of longstanding home-improvement projects. It’s projects like these that have kept the tool industry intact – well, mostly. The march of new products down the pipeline hasn’t really slowed much, as we’ll see in this installment of Tool News Nirvana. Milwaukee is coming to the table with an entirely new line of tools, plus an expansion to its tool storage solution. DeWalt announced a new nailer, Makita re-upped its commitment to outdoor tools, and Channellock rolled out an innovative training program. Let’s get to it!

Initially announced last year, Milwaukee is finally releasing the highly anticipated MX Fuel line of cordless equipment this month. Arriving first will be a 14” cutoff saw, a breaker, a core drill, a 3 aH battery, a 6 aH battery, and a battery charger. In the coming weeks & months, there will also be a cordless portable power supply, a sewer drum machine, and a tower light. We really like how Milwaukee is looking past “cordless tools” here, and is trying to innovate larger, construction-focused equipment. Look for more tool-specific coverage in upcoming Home Fixated content.

In more news from Milwaukee, they are expanding the PACKOUT™ storage system even more. Launching very soon will be a family of mechanic’s socket sets, packaged nicely in PACKOUT™-compatible storage containers. Initially, there will be a 3/8” drive x 28pc SAE set, a 3/8” drive x 32pc metric set, and a 1/4” + 3/8” drive x 106pc SAE and metric master set. There are also various PACKOUT™ socket storage containers available, in the event that you already own a set or two of ratchets that you’d like to keep. Because these latch securely to other PACKOUT™ storage solutions, you no longer have an excuse for not having your sockets readily available, no matter where you might be working.

DeWalt just announced a cordless nailing solution for those small or medium-sized roofing jobs in your future – the DCN45RN 15° Coil Roofing Nailer. With the included 2.0aH battery, this tool can drive up to 500 nails per charge. It also has some features common to pro-grade pneumatic equipment, such as a bump-fire mode and tool-free depth adjustment. We like this solution a lot – it ups the safety factor significantly by removing an obvious tripping hazard (the air hose) from the job site. Anything that makes work safer and easier is a big win in our book! Look for it to be launched in early summer.

Makita Is Continuing To Rule The Outdoors

This year, Makita is doubling-down on its “Rule The Outdoors” campaign. With recent launches of new tools, such as the 21” cordless lawnmowers (featured in this prior Tool News Nirvana post) which can cut up to 2 miles of grass on a single charge, Makita now offers over 30 pieces of outdoor power equipment. Look for an expanded multimedia campaign, more product placements, and maybe even an additional promo or two. In a similar sentiment to the previous tools in this post, we really appreciate how Makita is making yard work easier and more convenient. Ultimately, it means less time spent laboring and more time spent in a hammock – just “resting our eyes” for a few minutes (or a few hours).

Late last month, longstanding handtool manufacturer Channellock announced a new series of training videos geared toward younger/newer workers during this time of Covid-19. According to the company, recent school closures due to the illness have left approximately 52 million students unable to attend classes, including trades-focused classes. To help, they launched 9 weeks of “Trading Knowledge” videos, with 1 premiering per week. Each episode will feature an experienced tradesperson (think welding, HVAC, plumbing) who guides the viewer through practical demonstrations, tricks, and tips. The videos will be available to stream on Channellock’s Facebook, Instagram and YouTube pages. Channellock has been a personal-favorite handtool brand of mine, and it’s great to see them supporting newly-minted tradespeople during this difficult time. Also, if you’d like to see some molten-steel-laden video of a factory tour Home Fixated took, check out this Channellock tour link.

If you’d like to support CHANNELLOCK during this project: